Russian Student Who Tried to Go to Syria Freed Early 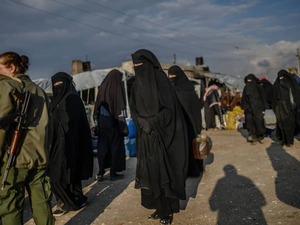 Russia on Saturday released a former student convicted for trying to enter Syria in a high profile 2016 case after she was granted parole this month.

Varvara Karaulova was freed from prison in Vologda, a city around 450 kilometres northeast of Moscow, the RIA Novosti news agency reported.

She was released a year and 10 months early.

A military court sentenced Karaulova to four and a half years in prison in 2016 for trying to enter Syria after falling in love with an Islamic State jihadist.

She was detained a year earlier after she tried to cross into Syria from Turkey while still a philosophy undergraduate at the renowned Moscow State University.

This month a court ruled she posed no threat to society and should be released earlier.

Karaulova's case shocked Russia in 2016, as the then 21-year-old wept in court and said her attempt to cross in Syria was "all a mistake".

It was also widely covered by state media.

Karaulova was charged with preparing to participate in a terrorist organisation, but pleaded not guilty, saying she was motivated by love for a Russian jihadist fighting in Syria.

She met him online while still a teenager and they wrote to each other for three years without meeting.

In 2014, he went to Syria and told her he was fighting for IS. Karaulova converted to Islam and began warning a hijab.

She disappeared without warning in May 2015, prompting a frantic search by her parents. They found that she had flown to Turkey and travelled to the border with other women hoping to join men fighting for IS.

Turkish border guards detained the group and she was forced to fly back to Russia with her father.

Thousands of people from the former USSR have travelled to Syria to fight with Islamists, according to Russian President Vladimir Putin, since Moscow intervened on the side of the Damascus regime in 2015.

Karaulova's case was particularly unusual in Russia since her family is not Muslim.