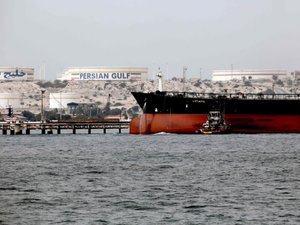 Russia will not immediately raise oil output after the United States ends sanctions waivers for buyers of Iranian crude in May, President Vladimir Putin said Saturday.

The United States announced this week that, in a bid to reduce Iran's oil exports to zero, it would from May 2 end US waivers that countries such as India, China, South Korea and Turkey currently have on buying Iranian crude.

"We have an agreement with OPEC to maintain production at a certain level and this agreement is in force until July," Putin told reporters on the sidelines of a summit in Beijing.

"I can't imagine how the world energy market will react" after the waivers end in May, Putin said.

But, he added, "none of our partners, including Saudi Arabia, is withdrawing from our agreements within OPEC."

Saudi Arabia, the world's top crude exporter, has also said it had no immediate plans to raise oil output after the sanctions waivers end.

There had been speculation that Riyadh could step in to plug the gap left by the removal of Iranian crude.

Eight countries including China, India and Turkey had been given temporary waivers by the US when it reimposed sanctions on Iran last year.

The end of the exemptions sparked fears of supply shortages, pushing prices to near six-month highs.