Exiled Islamist Leader to Be Buried in Algeria Saturday 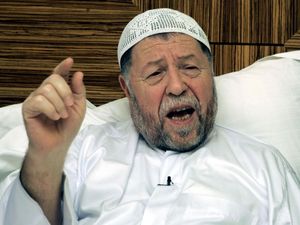 Abassi Madani, founder of Algeria's banned Islamic Salvation Front (FIS), will be buried in the capital Algiers on Saturday days after his death in Qatar where he lived in exile, a security source said.

Madani had called for armed struggle in 1992 after Algeria's military scrapped the country's first multi-party parliamentary election which the FIS had won, and pushed for the creation of an Islamic state in the North African nation.

"Abassi Madani will be buried today Saturday in the El Alia cemetery," in an eastern suburb of the capital near the airport, a security source told AFP on condition of anonymity.

A source close to the family said Madani's body would arrive from Doha at around 1125 GMT and would be taken to his home in the central Belcourt neighbourhood of Algiers before the burial.

Senior FIS figure El Hachemi Sahnouni said Madani could be buried either at the El Alia cemetery or the Sidi Mohamed cemetery close to his home.

He died in a Doha hospital on Wednesday from a "long illness" at the age of 88, FIS co-founder Ali Belhadj said.

The FIS had been on track to win an absolute majority in the 1991-92 parliamentary election when the army cancelled the second round, triggering a decade of civil war that left 200,000 dead, according to official figures.

Madani had been living in Qatar since 2003. He had fled into exile after serving a 12-year prison sentence in Algeria on charges predating the election.

For Algerians, Madani remained most associated with the bloodletting during the civil war that pitted the security forces against sometimes feuding Islamist armed groups.

He was imprisoned in 1991 and only called for an end to the violence in 1999, when his group said it was laying down its arms.