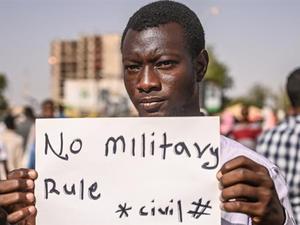 Sudan's army rulers and protest leaders on Monday offered differing visions for a joint council, but a military spokesman said he hoped a final structure for the body could be agreed soon.

The talks came after the two sides on Saturday agreed to form a joint civilian-military body to rule the northeast African country.

"The military council has presented its vision for a 10-member joint council, with seven military representatives and three civilians," a spokesman for the existing ruling military council Lieutenant General Shamseddine Kabbashi told reporters after a joint panel met on Monday.

"The Alliance for Freedom and Change presented its vision of a 15-member joint council, with eight civilians and seven military representatives," he said, referring to the group that is leading the protest movement that has rocked Sudan for more than four months.

Kabbashi defended the military's demand for a majority in the joint council.

"The necessities that made us take the people's side are still present and that's why it merits for us to be in the sovereign council," he said, without clarifying why the army generals were insisting on having a majority in the joint council.

He said that talks will continue on Tuesday.

In a statement, the protest leaders' alliance confirmed that no agreement was reached over the composition of the sovereign council.

It also said that both sides will present proposals on transitional structures, including a future civilian government and legislative body, and their respective powers, within 24 hours

"Our sit-ins and marches shall continue until all the revolution's goals are achieved," the alliance added.

A joint council, if agreed, would replace the existing 10-member military council that took power after the army ousted veteran leader Omar al-Bashir on April 11 amid massive protests against his rule.

The creation of a joint council would pave the way for a  civilian administration as demanded by protesters, as they continue to rally outside the army headquarters in central Khartoum.

Kabbashi said that during Monday's talks it was agreed with protest leaders to open some roads, a railway line and two bridges that lead to -- or pass near -- the military headquarters.

When asked whether by doing this the army was planning to disperse the sit-in, he said: "That's not what we are saying".

Late Monday, a Sudanese protest group said the army was trying to remove barricades and disperse the sit-in outside the military headquarters, but witnesses said troops had not moved in.

"The military council is a copy cat of the toppled regime. The army is trying to disperse the sit-in by removing the barricades," said the Sudanese Professionals Association (SPA), the group that first launched the protest movement against Bashir's regime.

Witnesses at the sit-in told AFP that protesters were building up some of the make-shift barricades but there was no movement of troops around the area.

The creation of a joint civilian-military council would be an overall ruling body, protest leaders have said, while they want a separate transitional civilian administration to run the country's day-to-day affairs.

That civilian government would work towards the first post-Bashir elections, protest leaders say.

The military council has so far insisted it has assumed power for a two-year transitional period.

Thousands of protesters first massed outside the army headquarters on April 6, demanding that the armed forces back them in ousting Bashir.

Five days later, the army took power through a transitional military council, having deposed Bashir, after months of protests that began with unrest over a tripling of bread prices.

Since then the 10-member council of generals has continued to resist calls to step down.

Western governments have expressed support for protesters' demands, but Sudan's key Gulf Arab donors have backed the military council, while African states have called for more time for the army to hand power to civilians.