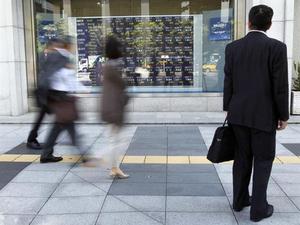 Asian markets were mixed on Monday as worries over the Eurozone debt crisis were tempered by better-than-expected U.S. jobs data, while the under-pressure euro touched fresh lows.

Shanghai finished 2.89 percent higher, or 62.49 points, at 2,225.89 after Chinese Premier Wen Jiabao said Saturday that the government will boost confidence in the stock market, but gave no details.

Financial markets in Japan were closed on Monday for a public holiday.

"As expected, the black clouds from Europe stopped any U.S. sunshine breaking through," Justin Harper, Head of Media and Research at IG Markets, said in a note.

"This pessimism is being played out across equity and currency markets and is likely to be 2012's recurrent theme."

Last week, European banks parked 455 billion euros ($577 billion) in the safe haven of the European Central Bank overnight -- a new record -- preferring to earn low interest rather than taking on the risk of lending to each other.

After a brief respite from bad headlines over the New Year holiday period, the Eurozone debt crisis has resurfaced with a vengeance, driving down the single currency and threatening Italy and Spain.

It also tumbled to 98.00 yen, compared with 98.71 yen on Friday, as dealers worried about European leaders' ability to tame the region's fiscal woes and the possibility of credit rating downgrades across the debt-strapped Eurozone.

Concerns about Spain and Italy are driving fears they could be next to need bailouts from the European Union and International Monetary Fund, after Greece, Ireland and Portugal.

In Spain, the new economy minister has warned that banks may face up to 50 billion euros in bad loan provisions.

Meanwhile, IMF chief Christine Lagarde said her organization may cut its 2012 global growth forecasts, while her comments that the euro was unlikely to "vanish" this year only stoked concerns about the currency.

The gloomy view comes against a backdrop of uniformly bad Eurozone data -- unemployment stuck at a record high, retail sales down and consumer and business confidence sinking.

Analysts said the figures showed that the Eurozone economy contracted in the last quarter of 2011 and will likely shrink again in the first quarter of this year to be officially in recession.

There were also worries that another round of meetings among European leaders this week would produce few concrete debt-busting measures.

"The tone for the euro remains weak into the ECB meeting on January 12," DBS Group Research said in a report.

The gloomy picture stood in contrast to jobs data from the United States, where the unemployment rate dropped to 8.5 percent in December, the lowest level in nearly three years, as hiring surged by 200,000, topping forecasts for a 150,000 increase.

Wall Street was mixed on Friday with the Dow Jones Industrial Average losing 0.45 percent, the broad-based S&P 500 slipping 0.25 percent while the tech-heavy Nasdaq finished up 0.16 percent.

On oil markets, New York's main contract, West Texas Intermediate crude for delivery in February was up 26 cents at $101.82 in afternoon trade.