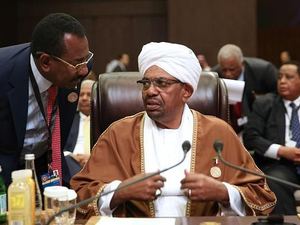 International appeals judges Monday upheld a reprimand of Jordan for failing to arrest former Sudanese president Omar al-Bashir during a visit to the Arab country two years ago.

Amman had appealed a decision by the International Criminal Court which found that Jordan "failed to comply with its obligations" when it refused to detain Bashir in 2017, wanted by the Hague-based tribunal for genocide, war crimes and crimes against humanity.

But the ICC's appeal judges eased the blow by reversing pre-trial chamber judges' decision to refer Jordan to the UN Security Council and the court's Assembly of States Parties (ASP) for further measures.

Despite two international warrants for his arrest on 10 charges arising from the conflict in Darfur, Bashir freely attended an Arab League summit in Amman in March 2017.

"By failing to arrest and surrender Mr Bashir, in circumstances in which Mr Bashir was entitled to no immunity, Jordan prevented the court from exercising an important power and a fundamental function," Judge Chile Eboe-Osuji said.

Jordan is a member of the Rome Statute, which underpins the tribunal -- established in 2002 to try the world's worst atrocities -- and as such has agreed to comply with the court's orders.

In a first for the court, Amman last year appealed the ICC's findings that it failed to fulfil its legal obligations in seizing Bashir, saying it was not obliged to do so.

Jordan's lawyers argued that Bashir at the time of his visit was a sitting head of state "and therefore immune to arrest," based on the international legal principle of comity between states.

But Eboe-Osuji said Monday that head-of-state immunity did not stop the ICC -- an international court -- from exercising its jurisdiction according to its founding document, the Rome Statute.

Easing the verdict on Jordan however, Eboe-Osuji added that the court's pre-trial judges should not have referred the matter to the Security Council and the ASP.

"The judges' discretion to refer the case to the UNSC and ASP was tainted," Eboe-Osuji said.

Over the last decade Bashir has travelled to a number of countries who did not arrest him, including ICC member states like South Africa and Jordan.

Bashir was toppled last month after 30 years of iron rule in Sudan, raising hopes that he would be extradited to The Hague to stand trial.