At Khartoum Sit-In, Protesters Dream of a New Sudan 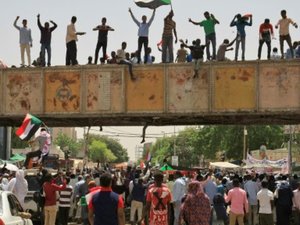 They brave the sweltering summer heat and the accompanying dust to pursue their dream: building a new Sudan.

While some protesters at a weeks-long sit-in outside Khartoum's army headquarters dare to hope for democracy, others say they will be content just to secure a prosperous future.

But they agree on one goal: a Sudan that is free of Islamists, who one protester said "destroyed the country".

Thirty years after coming to power in a 1989 Islamist coup that toppled a democratic government, President Omar al-Bashir was deposed on April 11.

Despite his departure, protesters have continued to camp outside the vast Khartoum military base to insist that the military council which replaced him hand power to civilians.

Hundreds walk each morning along the major boulevard that runs alongside the compound, the epicentre of the demonstrations that led to Bashir's downfall.

The smell of coffee and foul, a staple Sudanese dish of beans, mixes with the stench from makeshift toilets used by thousands of protesters who have spent weeks camping there.

But whether young or old, the protesters retain their enthusiasm and endure the privations with good humour.

"We want a country that recognises our skills, a country led by civilians and not by Islamists," said Mohamed Adel Hai, 22, a student who has never experienced life under a president other than Bashir.

"We want a country with civilian and democratic rule."

Experts say the shape of a post-Bashir Sudan will depend on the outcome of power-sharing negotiations between the ruling military council and protest leaders.

In particular, they cite the need for a compromise acceptable to both sides, as well as a majority of citizens.

"There is now a mixture of euphoria and caution about the future," Chatham House said in a recent report.

For Abu al-Kamel, who was 18 when Bashir came to power, "the people of Sudan, above all, want to satisfy their basic needs of education and health... along with social justice".

"(The Islamists) literally destroyed the country by hosting Osama bin Laden and Carlos (the Jackal), which led to international sanctions," said the Khartoum-based university worker.

French secret service agents seized the Venezuelan-born leftist militant in Khartoum in 1994 and flew him to France where he was jailed over a string of deadly attacks.

Ex-Al-Qaeda supremo Bin Laden lived in Sudan between 1992 to 1996, which led Washington to slap the African country on its list of state sponsors of terrorism.

In October 2017, Washington lifted a 20-year-old trade embargo on Sudan, but Sudan remains on the "terrorism blacklist" along with Iran, Syria and North Korea.

Sudanese have seen their purchasing power dwindle dramatically in the last few years of Bashir's rule.

Protester Aisha, who gave only her first name, is modest in her hopes.

"All we want is to eat our foul and watch our country be rebuilt," she said.

But Sudanese people are known for their passion for politics and public debates, something that was curbed under Bashir's iron-fisted three decade rule.

Their enduring joviality and slogans feed into a carnival-like atmosphere at the Khartoum sit-in, which has turned into a marketplace for vendors selling lemonade, soft drinks and national flags.

Women hawking tea make brisk business, sitting under the shade of trees in the summer heat.

Protester Intissar Rabia Mohamed hopes that demonstrators' efforts will not go to waste.

Asked what she hopes to for, she said: "a prosperous, developed and dynamic Sudan".