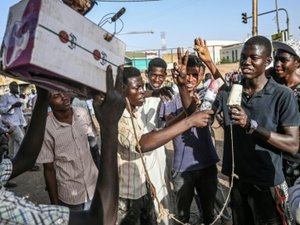 Grasping an empty plastic bottle that stands in for a microphone, young Sudanese protester Abu Bakr Marghani pretends to be a journalist interviewing demonstrators at Khartoum's sit-in outside the army complex.

The would-be correspondent is cheered by his small crew each time he thrusts the device in front of a peer and asks a question.

"We mean to poke fun at Sudanese state media who did not take our side during the protests," said Marghani, 18.

"They did not cover it at all -- only foreign media did," he said, as one of his buddies holds a wooden stick with a plastic cup dangling from one end, in a creative attempt to mimic an adjustable boom mic.

Another friend carries a cardboard box on his shoulder as if it's a video camera, complete with the scribbled name of a foreign TV network.

Since December 19, Sudan has been rocked by protests that finally led last month to the ouster of president Omar al-Bashir, who was in power for three decades.

Protesters remain encamped outside the military complex, demanding that the generals who toppled Bashir on April 11 be replaced by a civilian administration.

State media's complete blackout of the months of demonstrations prior to his ouster -- including a failure to report the deaths of dozens at the hands of security forces -- left protesters fuming.

"People were dying for four full months and all the Sudanese media broadcast was cooking shows," blasted Marghani.

"They only started siding with us after Bashir was toppled."

Sudan TV said it had to comply with government directives.

"The news broadcast was within the limits allowed by the government at the time," Sudan TV news director Mozamel Suleiman told AFP.

"We are owned by the state and our narrative had to conform to the state's general policy."

Angry protesters have since on several occasions forced state media journalists out of the sit-in when they come to report on it.

Marghani stopped a protester to ask his view of the ruling army generals.

The quick response was "fall or no fall, we are staying" -- a rallying cry of the protest movement.

During Bashir's long tenure, the press was severely curtailed, according to media activists.

"News related to his regime, prominent opposition figures or conflict-torn areas in Sudan were problematic" for those who reported them, said leading Sudanese journalist Faisal Saleh.

"Officers (of NISS) used to go to newspapers' headquarters to check and cross out whatever they didn’t want published," said Saleh.

"From sports news to political affairs, anything was subject to scrutiny."

The confiscation of entire print-runs was a tactic to inflict maximum losses on publishers, said Osman Mirghani, editor-in-chief of independent newspaper Al Tayyar.

"It cost us a lot of money," said Mirghani, whose editions were confiscated some 80 times under Bashir's rule.

The editor was detained for more than a month during the peak of the protests against Bashir.

Media watchdog Reporters Without Borders recorded at least 100 cases of journalists being arrested during the protests.

This organisation ranks Sudan 175th out of 180 countries in its 2019 World Press Freedom Index.

But things appear to be changing since Bashir's ouster.

Sudan TV has shown footage of the Khartoum sit-in.

And local newspapers were quick to report his downfall.

"There is now no pre-censorship and newspapers go to print freely without running the risk of being confiscated," said Mirghani.

Suleiman agrees that a wider range of news is now broadcast on Sudan TV.

"We are now totally free. We now cover highly sensitive news even on air," he said, referring to live footage of the sit-in.

But non-state journalists like Mirghani and Saleh are still sceptical about the future of media in Sudan.

"The authoritarian mindset in control of state media is still prevalent," Mirghani said.

"It remains largely constrained and self-censored," he said.

Saleh said state media still has a long way to go before it can claim any real degree of independence.

"It will take a long time for the old mentality to die and to see a palpable change," he said.