Jumblat: Have We Returned to Tutelage Era? 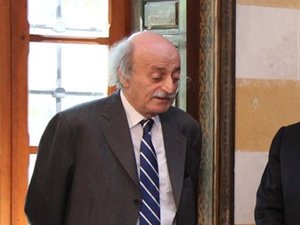 Progressive Socialist Party leader ex-MP Walid Jumblat on Thursday criticized a raid by State Security agents on the building of al-Akhbar newspaper, wondering if Lebanon has returned to the Syrian tutelage era.

"How can we accept the violations against the press and tomorrow against all individual and personal freedoms?" he warned.

He added: "What is the stance of the parties, top politicians and freedom defenders?"

The daily has strongly criticized both State Security and Foreign Minister Jebran Bassil over a similar raid at the Foreign Ministry.

It said the raid was linked to Bassil's intention to identify the person who leaked three diplomatic reports from the Lebanese embassy in Washington to al-Akhbar.

Six diplomats and an employee were interrogated during that raid.

Come on go discuss it with your ally the iranian resistance and complain.

At an iftar banquet.... with him, Saad and the terrorists of course.

Someone must stop Bassil once and for all, he’s a danger for democracy and freedom of speech.

Democracy and Lebanon are far apart. The Iranian regime does not beleive in it and neither does Syria so why should we be surprised by this move?