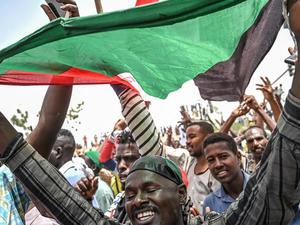 Women queue for hours under scorching sun in the hope of withdrawing cash from an ATM in the Sudanese capital Khartoum. Sometimes it works, sometimes it doesn't.

The hunt for cash has become a national sport in Sudan, where a deep economic crisis helped sparked months of protests against veteran president Omar al-Bashir.

"I've been waiting on average two hours a day for the last eight days (to withdraw cash)," said Halima Souleiman as she waited in an ever-lengthening queue of women on a Khartoum street.

"Each time, the money in the machine has run out."

Rumours had spread that an armoured van had arrived to load the machine with cash, sparking a rush of customers.

When she finally made it to the small cabin containing the ATM, she emerged smiling and brandishing a wad of banknotes.

Our iftar, the meal that ends the daytime fast observed by Mulims during Ramadan, "will be bigger tonight", she said.

But with withdrawals limited to 2,000 Sudanese pounds (around $40, 36 euros) a day, the chronic cash shortage tops the list of Sudan's economic woes.

It has been accompanied by persistent power cuts, fuel shortages and spiralling inflation.

Sudan is one of the poorest countries in the world -- the United Nations last year ranked it 167th out of 189 on its Human Development Index.

The economic crisis far predates the protests against Bashir that broke out in December.

It was exacerbated by widespread corruption and huge spending on a military response to multiple regional rebellions under Bashir's repressive rule.

In 2011, South Sudan won its independence, taking with it three quarters of the country's oil receipts and dealing a heavy blow to public coffers.

Sudan has also endured two decades of US sanctions over human rights violations and alleged support for "terrorist" groups.

The sanctions were lifted in 2017, but the country remains on the State Department's blacklist of state sponsors of terrorism.

The potential penalties have kept foreign investors away.

The International Monetary Fund has forecast its GDP will shrink by 2.3 percent in 2019.

Four months of mass demonstrations have only added to its woes, disrupting supply chains and aggravating shortages that have set the price of basic goods skyrocketing.

The lack of liquidity has been fuelled by the plummeting value of the Sudanese pound and the "lack of confidence in the banking system", said Ibrahim Onour, a professor in finance and economics at the University of Khartoum.

On the black market, a dollar buys 55 pounds.

Some have started to withdraw pounds to convert them into other currencies.

That "has caused a rise in prices which in turn has led to more demand for liquidity," Onour said.

Mondather al-Rifai, a 30-year-old trader, showed AFP cheque books he said are now useless -- nobody accepts cheques any more as the banks are reluctant to back them.

"I deposited my money in the bank but I can not withdraw it anymore, or only in tiny tranches," he said.

Many shops and service providers have stopped accepting bank cards, preferring cash, an Asian restaurateur said on condition of anonymity, adding that business was down by half.

"Most suppliers no longer accept credit cards or cheques," making it difficult for restaurants to accept them either, he said.

Those who do accept cheques sometimes demand a 20 percent mark-up, he added.

Some are placing their hopes on a three billion-dollar credit line pledged by Saudi Arabia and the United Arab Emirates to help provide liquidity and ease the chronic shortages of basic goods.

"This aid falls far short of the current needs of Sudan," he said.