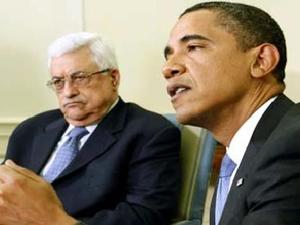 President Barack Obama Wednesday pledged unwavering commitment to forge significant progress in the Middle East this year, despite the furor whipped up by Israel's raid on a Gaza aid flotilla.

Welcoming Palestinian President Mahmoud Abbas to the White House, Obama promised the "full weight" of U.S. diplomacy on the latest crisis and to push Israelis and Palestinians out of a "dead end" and into direct peace talks.

He also unveiled 400 million dollars of U.S. aid for Gaza, to be spent on housing, education and infrastructure, calling the situation there "unsustainable" but warned a Palestinian state was the only long-term solution.

The White House talks came with the Arab world still livid about the Israeli raid on the activist aid flotilla on May 31, which killed nine people, and amid frantic U.S. efforts to stop the uproar derailing peace efforts.

"I believe that potentially we can make some significant progress before the end of the year," Obama said, telling Abbas in the Oval Office he remained deeply committed to spending personal political capital in the Middle East.

The U.S. leader said that the 400 million dollar aid package was meant to reaffirm U.S. commitment to improving the "day to day lives of Palestinians."

He said it may be possible to take the "tragedy" over the Gaza aid convoy and turn it "into an opportunity to create a situation where lives in Gaza are actually, directly improved."

Abbas said that the aid package was "positive" and told Obama in front of reporters that he was not imposing conditions on moving from proximity talks to direct talks -- but needed to see real progress before doing so.

"We are working in order to make progress. President Obama is working for that, to see progress," Abbas said.

Erakat added that the projects would be carried out by the U.N. agency for Palestinian refugees (UNRWA). Abbas has no authority to disperse aid in the impoverished Hamas-ruled Gaza Strip.

The U.S. leader also called on Israel to live up to United Nations Security Council conditions on probing the flotilla raid, which laid out the need for "credible, international involvement."

"I've said to the Israelis directly ... it is in Israel's interest to make sure that everybody knows exactly how this happened so that we don't see these kinds of events occurring again."

But Israel has rejected any international inquiry into the affair, amid calls for an easing of the three-year blockade of Gaza.

Earlier, Israeli Prime Minister Benjamin Netanyahu said he was in talks with "several members of the international community" but said a probe should not focus on the role of Israeli soldiers in the raid.

Obama, while saying Israel had a right to make sure arms were not infiltrated into Gaza, also said that it should be possible to work out some kind of framework to avoid a repeat of the flotilla raid.

"It seems to us that there should be ways of focusing narrowly on arms shipments, rather than focusing in a blanket way on stopping everything and then, in a piecemeal way, allowing things into Gaza," he said.

Abbas met Obama a week after Netanyahu canceled his own White House trip to deal with the fallout from the Gaza crisis.

An Israeli official said earlier Netanyahu was working to reschedule the visit, which could take place before the end of June.