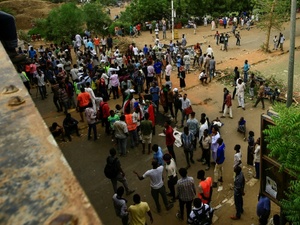 Sudan's army rulers and protest leaders Monday resumed crucial talks over handing power to a civilian administration after days of deadlock in negotiations, a spokesperson for the protest movement told AFP.

Protest leaders Omar al-Digeir and Satea al-Haj were among those attending the talks on behalf of the Alliance for Freedom and Change group, the movement's spokeswoman Mashar Darraj said.