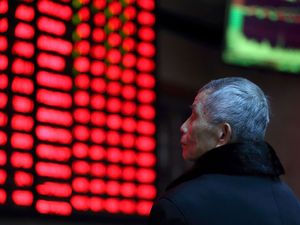 In cryptocurrency deals, Bitcoin rebounded back above $7,000 for the first time since September, buoyed by resurgent interest in the dominant digital currency.

However, equity investors began the day in underwhelming fashion in Asia, as the lack of a US-China trade deal jarred markets.

Negative sentiment spilled over into Europe on the back of the latest developments in the trade war between the world's top two economies.

Negotiations in Washington ended Friday without agreement and a massive US tariff hike on Chinese imports kicked in.

Markets remain on red alert over a trade war between the two big superpowers that most observers warn could shatter global economic growth -- and also hurt demand for commodities like oil.

"It's Groundhog Day yet again, with yet another day of US-China focused selling taking hold.

"Excitement from Chinese markets last week have certainly faded, with both sides failing to find any form of agreement to avert the imposition of further tariffs."

White House economic advisor Larry Kudlow said US President Donald Trump and China's Xi Jinping could meet next month on the sidelines of the G20 summit to hash out their differences on trade -- but no new talks are yet scheduled.

Trump had accused Beijing of reneging on its commitments and ordered new punitive duties -- which took effect Friday -- on $200 billion worth of Chinese imports, raising them to 25 percent from 10 percent.

He then ordered a tariff hike on almost all remaining imports from China, which are worth about $300 billion, according to US Trade Representative Robert Lighthizer.

Saudi Arabia said Monday that two of its oil tankers were damaged in mysterious "sabotage attacks" in the Gulf, as tensions soared in a region already shaken by a standoff between the United States and Iran.

Riyadh, Tehran's regional arch-rival, condemned "the acts of sabotage which targeted commercial and civilian vessels near the territorial waters of the United Arab Emirates", a foreign ministry source said.

The global oil market won support "on dealer concerns about supply disruptions in the Middle East and this despite market worries over global growth prospects", noted Oanda analyst Dean Popplewell.

Saudi Arabia is the most influential member of the Organization of the Petroleum Exporting Countries (OPEC) oil exporters' cartel, with Iran in second place.

Added to geopolitical jitters, an Iranian woman who worked for the British Council was sentenced to 10 years in prison for "spying", the judiciary's news website Mizan Online reported Monday.