China Fires Back at U.S. with Tariff Hike on Goods Worth $60 Billion 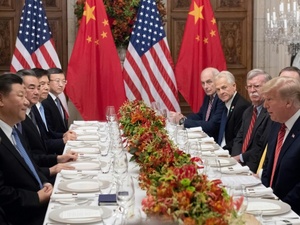 China said Monday it will raise tariffs on $60 billion worth of U.S. goods from June 1, in retaliation for the latest round of U.S. tariff hikes and Washington's plans to target almost all Chinese imports.

The announcement came after the latest round of U.S.-China trade negotiations ended Friday without a deal, and after Washington increased tariffs on $200 billion worth of Chinese products.

U.S. President Donald Trump had also ordered the start of a process to impose new duties on another $300 billion worth of Chinese items.

China's rates will target a number of American imports with tariffs rising up to as high as 25 percent, according to a statement by the Tariff Policy Commission of the State Council -- China's cabinet.

"China's adjustment of tariff-adding measures is a response to U.S. unilateralism and trade protectionism," the statement said, adding that it hoped the U.S. would work with China towards a "win-win agreement".

Despite the retaliation, Beijing appeared to give time to find a resolution by setting the June 1 date.

Most observers have warned a trade war between the world's two largest economies could shatter global economic growth, and hurt demand for commodities like oil.

The Chinese response was announced soon after Trump warned Beijing not to retaliate.

"China should not retaliate-will only get worse!" the U.S. president wrote in a series of tweets on trade.

But Beijing appeared to dig in.

In addition to tariff hikes, China could also use other measures to hit back at the United States, as it imports fewer U.S. products -- which limits its ability to match tariffs dollar-for-dollar.

"Many Chinese scholars are discussing the possibility of dumping U.S. Treasuries and how to do it specifically."

Beijing is the biggest holder of U.S. debt, and Bloomberg News estimated last year that the Chinese state held around $1.2 trillion's worth.

"As for the trade war launched by the U.S. side, China has long expressed that it is unwilling to fight, but it is not afraid to fight, and it has to fight when necessary," China's main broadcaster, the state-run CCTV, added.

In a previous round of tit-for-tat moves, the U.S. imposed 10 percent tariffs on $200 billion worth of Chinese imports in September.

Beijing announced shortly after that it was hitting more than 5,000 categories of U.S. products with tariffs of five to 10 percent.

Both sides have indicated that discussions will continue. Beijing's top trade negotiator, Liu He, said Friday that they would take place in the Chinese capital at an unspecified date.

White House economic advisor Larry Kudlow told U.S. media Sunday that Trump and Chinese President Xi Jinping could meet next month on the sidelines of the G20 summit to hash out their differences on trade, although no new talks are scheduled.

"The two presidents maintain contact through various means," the Chinese foreign ministry spokesman said, without confirming a possible meeting between the two leaders.

Beijing has so far imposed tariffs on $110 billion worth of American goods in retaliation for the U.S. duties.

Trump had already hit a further $50 billion in Chinese goods with tariffs of 25 percent last summer.

The U.S. leader began the standoff last year because of complaints about unfair Chinese trade practices.

The United States is pressing China to change its policies on protections for intellectual property, as well as massive subsidies for state-owned firms, and to reduce the yawning trade deficit.

Since last year the U.S. and China had exchanged tariffs on two-way trade worth hundreds of billions of dollars, gutting U.S. agricultural exports to China and weighing on both countries' manufacturing sectors.