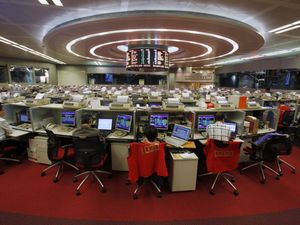 Asian markets extended a global sell-off Tuesday following hefty losses on Wall Street that came in response to China's hike in tariffs on $60 billion of US imports, ramping up tensions in a trade war between the global economic titans.

The move by Beijing was followed by a warning of further action such as dumping US Treasuries and came days after Washington more than doubled levies on $200 billion of Chinese goods and Donald Trump said he was looking at more than $300 billion more.

The stand-off has sent shockwaves through trading floors, where most dealers had a little over a week ago been confident the two sides were close to a deal.

World markets have rallied for most of the year on the back of optimism about an agreement.

Sydney and Singapore each dropped 0.9 percent, with Manila and Jakarta both down 1.4 percent.

There were also losses in Taipei and Wellington, though Seoul edged up slightly.

"Uncertainty and short-term sentiment impact is likely to stay," Medha Samant, director of investment at Fidelity International, told Bloomberg TV. "In the short term, it looks like volatility is here to stay and we could see this risk-off, risk-on going on for a long time."

The retreat came after the Nasdaq on Wall Street suffered its worst day of 2019 and the Dow ended at its lowest point in more than three months.

After announcing the higher tariffs, the editor of Communist Party-owned Chinese newspaper Global Times warned Beijing could also hit the US by offloading Treasuries, ending US agricultural purchases and reducing orders for Boeing airplanes.

OANDA senior market analyst Jeffrey Halley warned there could be worse to come.

"Given that equity markets are so far behind the curve in repricing the risk to the new-world reality, equities could be in for an extended period of pain," he said in a note.

However, while there is a lot of fear about an all-out trade war, which could batter the world economy, both said talks will continue, though no date has been set for the next round.

Also, Trump said he had a feeling talks with China will be "very successful" and that he intended to meet his Chinese counterpart Xi Jinping at next month's G20 summit.

"However, differences on key issues and in negotiating styles may spark more market volatility ahead."

On currency markets the yuan -- which has fallen more than two percent since Trump last week threatened to hike tariffs -- edged up slightly against the dollar, while the greenback was also slightly lower against the pound and euro.

And oil prices edged up after Monday's losses as concerns about the impact on demand from the trade war offset geopolitical tensions in the Middle East, the crisis in Venezuela and "sabotage attacks" on two Saudi Arabian oil tankers.

"Oil prices have struggled to retain bullish gains as the Sino-US trade dispute clouds economic outlook for the coming term."