Bassil to Present ‘Initiative’ at Cabinet to Slash State Deficit 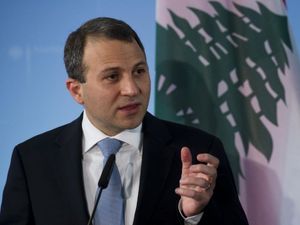 The Cabinet held another budget session on Tuesday amid reports that Foreign Minister Jebran Bassil plans to present an “initiative” that will help in slashing the state’s budget deficit.

“Bassil will make a qualitative intervention at the government meeting to put the budget on the final route,” said Minister of State for Presidency Affairs Salim Jreissati of Bassil’s Free Patriotic Movement.

For his part, Industry Minister Wael Abu Faour commenting on Bassil’s intended statement at Cabinet said he has no knowledge about it.

Bassil's initiative is he will return all the funds he looted and stop filling his own bank accounts.

Most of the hundreds of millions he stole are reinvested in property purchases. Last month he bought yet another chunk of land from the Baba sweets family in Sidon for $3.5M . I forgot which bank he used , but I can ask around if the readers are interested in finding out which bank launders the illegally acquired funds.

We cannot wait for yet another successful initiative the dwarf has in mind. Lets just remind ourselves of the many he has had and apart from selling passport to Syrian terrorist which is the only one he has managed to sell well....