Ambassadors of Iran, Syria and Others Offer Condolences over Sfeir Passing 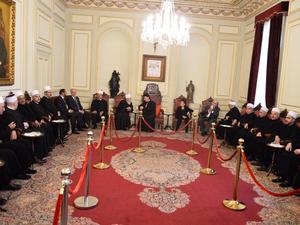 Foreign diplomats, Lebanese officials, religious and security figures flocked to Bkirki for the second on Tuesday to offer their condolences to Maronite Patriarch Beshara al-Rahi over the passing of former Maronite Patriarch Nasrallah Sfeir.

Iranian ambassador to Beirut Mohammed Jalal Firouznia said “Sfeir was a distinguished figure and has a great role in the history of contemporary Lebanon. Our relationship has spread over decades through direct contact with Iranian political and religious delegations who stressed with his Beatitude that cultural heritage and religious dialogue and civilization is the moral bridge for convergence among peoples of this region.”

UAE Ambassador to Lebanon Hamad al-Shamesi said from Bkirki “Sfeir was one of the most important figures in Lebanon’s history. He is a man of moderation, tolerance and love. In the year of tolerance, the Embassy of the Emirates had plans to honor one person, Patriarch Sfeir, with a General Emancipation Shield of the Embassy of the Emirates in Beirut for a moderate, wise national figure. The honoring was on 26 Ramadan, but God took his trust.”

Sfeir, who wielded considerable political influence during the country's civil war and was an ardent advocate of a Syrian troop withdrawal, died Sunday at the age of 98.

The Syrian Ambassador to Lebanon Ali Abdul Karim also paid condolences. We do not need his nations condolences, years back they would have tried to shorten the life of patriotic Patriarch.