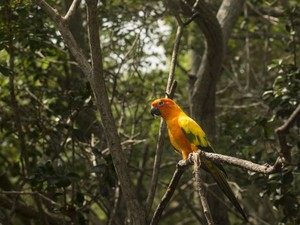 Scientists are deploying ultra-sensitive sensors in the Amazon to collect images and sounds of the rainforest's rich biodiversity in real time, in an effort to track preservation efforts.

The Big Brother-style Providence Project was launched two years ago by French scientist Michel Andre of the Polytechnic University of Catalonia and Mamiraua Sustainable Development Institute in northern Brazil.

"I want to help the rest of the world understand the urgency of protecting the Amazon rainforest and supporting conservation initiatives," says Andre, who is director of the university's bioacoustic applications laboratory.

"Satellites and drones have been used for years to quantify the number of trees cut down every year," Andre tells AFP.

"But there is very little data about the diversity of species living in and underneath the canopy. This gave us the idea of using state-of-the-art technological tools to monitor biodiversity on a large scale.

"Thanks to Providence nodes, we are collecting countless images and sounds in the Mamiraua flooded forest areas," he adds.

"Those smart ears are sending the data in real time to my laboratory where we are analyzing them with the help of the local indigenous communities of Mamiraua and the biologists of the institute.

"Since the start of the project, 10 nodes have been deployed in the reserve and over 40 species (birds, monkeys, insects, bats, dolphins, fish) have been identified and monitored."

"We divided this ambitious project into three phases," explains Andre.

"Phase one occurred in Mamiraua with 10 nodes distributed in different areas to check that our system was able to work in very harsh conditions.

"Now, we are in an intermediate phase between phase one and phase two that started last December. We will deploy 10 of these nodes in the cloud forest in Bolivia called Madidi and another set of 10 nodes in Xingu in Brazil," he adds.

"By 2021, we'll have 30 operational nodes in three different areas of the forest.

"During this pre-phase two, we will also build eco-acoustics indices that will help us to monitor the health of the Amazonian primary forest ecosystems.

"Phase three is planned for 2025 with the ultimate goal of Providence: monitoring the whole Amazon rainforest with one thousand nodes deployed in a 100 square kilometer (38 square miles) grid to be able to study the impact of climate change and of human activities on this unique habitat," Andre says.

"Phase one and pre-phase two were funded by the Gordon and Betty Moore Foundation at a cost of $3.5 million. Phase two is estimated to be $8 million and phase three around $30 million.

"We still don't have funds for phases two and three."

"One fundamental aspect of Providence is to work side by side with the indigenous communities as they are the true guardians of the Amazon," says Andre.

"They have a very precious vernacular knowledge of the biodiversity that we need to learn and understand.

"They have been involved from the very start in Providence so we can share a common approach for conservation and reach our objectives together."