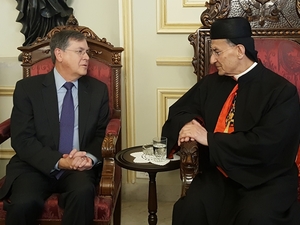 Satterfield began his visit by offering condolences in Bkirki over the death of ex-Maronite patriarch Nasrallah Sfeir.

The U.S. official's visit to Lebanon comes after U.S. Ambassador Elizabeth Richard was informed of a unified Lebanese stance over the demarcation of the maritime border, which indicates that the trip is aimed at continuing discussions over a U.S.-mediated mechanism.

There are some 860 square kilometers of waters claimed by the two countries, which are technically in a state of conflict.