Pope Hails Sfeir as 'Craftsman of Peace, Defender of Sovereignty' 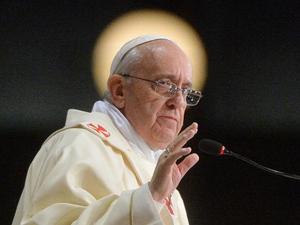 Pope Francis has hailed late former Maronite patriarch Nasrallah Sfeir as a craftsman of peace and “ardent defender of the sovereignty and independence of his country.”

“I address my warm condolences to you, as well as to his family and to all the faithful of the Patriarchal Church of Antioch of the Maronites, whom he governed for many years with as much gentleness as determination,” Pope Francis wrote in a May 14 cable to Sfeir’s successor, Beshara al-Rahi.

Francis called Sfeir “a free and courageous man,” saying he was “a decisive craftsman of gathering, peace and reconciliation. Ardent defender of the sovereignty and independence of his country, he will remain a great figure in the history of Lebanon.”

“I ask the Father of all mercy to welcome to his home of peace and light this wise and committed pastor who showed the love of God to the people who had been entrusted to him,” the pope added.

Nice photograph. It would have been better without the microphone though.

The patriarch Sfeir was Lebanon’s father. When Syria invaded and occupied the country he didn’t flee and hide abroad . He should have been our president ! He was a real man and will be sorely missed.

That is not a microphone. It is a gamma wave projector that makes His Holiness's head emit beta radiation, as you see.
It is regrettable, the Vatican later announced, that the Pope did not understand that "sovereignty" in a territory where the majority population, Shia Muslims, is disenfranchised by a colonial-holdover article in the constitution which gives the Christian minority half the seats in the national legislature, means foreign control. If the Christian sect did not have the backing of the UN, EU, US, Israel, etc., the majority would make its wishes known and the territory could be said to be in local hands: sovereignty.