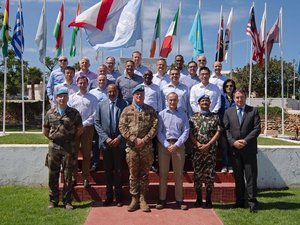 An international delegation of fifteen senior military officers from the British Royal College of Defence Studies (RCDS) led by Air Vice Marshall Garry Tunnicliffe visited Lebanon for one week to learn about the political, economic, security, and social challenges facing Lebanon and how these relate to regional and international stability.

“They saw first-hand how the UK supports Lebanon and the Lebanese Armed Forces during a visit to Four Land Border Regiment at Baalbeck. Through meetings with prominent members of the business community, they hope to understand how Lebanon can move the economy forward in challenging times,” the British embassy in Lebanon said in a statement.

The delegation also visited UNIFIL’s Headquarters in Naqoura and met with UNIFIL Commander Major General Stefano Del Col, to talk about how the U.N. is conducting a large U.N. mission in a volatile part of the Middle East. They also met with representatives from UNHCR and the Lebanese Petroleum Administration.

Welcoming the RCDS’ senior officers to Beirut, British Ambassador Chris Rampling said: “It is a privilege to host top military officers from the UK and the world, for the second year in a row, as part of their Royal College of Defence Studies study tour focusing on Lebanon. Their visit, a first for many of the senior officers attending, is another example of the strategic importance that Lebanon has politically, socially and from a security perspective on regional stability and prosperity.”

“We’re proud of the UK’s strong defense links with Lebanon, and I am certain that the officers’ experience will be like no other in the region,” he added.

Royal College of Defence Studies (RCDS) is based in the UK for military officers and senior government civil servants from the UK and allied nations.  The aim of the course is to instruct members in defense and international security matters.

“We’re proud of the UK’s strong defense links with Lebanon, and I am certain that the officers’ experience will be like no other in the region,” he added. We are so blessed that the old Empire that molded the Middle East bestows its good wishes and successes upon us.