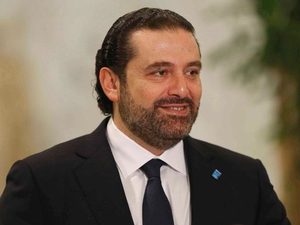 Prime Minister Saad Hariri met with Acting US Assistant Secretary of State David Satterfield for a second time on the visit who made no comments to the press after his meeting with the Premier.

On Tuesday, Hariri also received Satterfield who has been mediating the maritime border dispute between Israel and Lebanon.

Satterfield arrived Tuesday to begin a two-day visit to meet officials in Lebanon, which is in an economic crisis. He did not speak to journalists after his meeting with Hariri.

Lebanon's economy is mired in debt and struggling to grow as the civil war in neighboring Syria stretches into its eighth year. The war has brought more than a million refugees into the Mediterranean nation. Beirut hopes that oil and gas brings cash into the state's dried up coffers.

Satterfield's visit comes a week after President Michel Aoun presented the U.S. ambassador to Lebanon with a "unified stance" regarding the demarcation of the maritime border between Lebanon and Israel.

Last month, Parliament Speaker Nabih Berri told the commander of the U.N. peacekeeping force in Lebanon, Maj. Gen. Stefano del Col, that Beirut is ready to establish the maritime border and special economic zone with Israel similar to the one used to demarcate the land border between the two countries after Israel's withdrawal from southern Lebanon in 2000.

There are some 860 square kilometers (330 square miles) of waters claimed by the two countries, which are technically in a state of conflict. Israel and Lebanon's Hezbollah fought a monthlong war in 2006.

In December 2017, the Lebanese Cabinet approved licenses for three international companies to carry out exploratory drilling off the Lebanese coast. The licenses will allow Italy's Eni, France's Total and Russia's Novatek, who bid for two of Lebanon's 10 offshore blocks, to determine whether oil and gas exist.

Last month, Lebanon's Energy Minister Nada Boustani announced a second round of bidding for licenses to search offshore for oil. Boustani said the deadline for companies to submit their offers for three new blocks is Jan. 31, 2020.

Lebanon is expected to begin drilling for oil and gas later this year in block 4 that is off the coast north of Beirut and in block 9 along the maritime border with Israel in January 2020.

Lebanese governments have long sought energy development but political bickering and the dispute with Israel over the maritime border has caused delays.

Satterfield visited earlier Tuesday the headquarters of the Maronite Calthoic church, where he paid condolences for the passing away of its former patriarch, Cardinal Nasrallah Sfeir, who died on Sunday.

This has to be comical to Satterfield knowing full well this PM could not convince his own cabinet over drinking water....