Asian Markets Tick Up after Trump Tweets but Uncertainty Remains 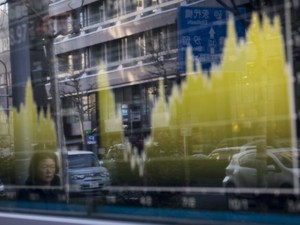 A series of tweets by Donald Trump playing up the chances of a trade deal with China provided a much-needed boost to Asian equities Wednesday but investors trod cautiously as analysts warned of more volatility to come.

After more than doubling tariffs on $200 billion of Chinese goods last week -- sparking a retaliation from Beijing -- Trump has threatened to hit a further $300 billion with more levies if he does not get his way in high-stakes talks.

However, in a series of tweets Tuesday the president gave markets some hope that a deal between the economic titans will eventually be struck with his counterpart Xi Jinping.

"When the time is right we will make a deal with China", he wrote, adding that his "respect and friendship with President Xi is unlimited".

He went on to say: "We can make a deal with China tomorrow, before their companies start leaving so as not to lose USA business" and called on the Federal Reserve to "match" whatever the Chinese central bank does to support the US economy.

The remarks, while again accusing China of backsliding in the trade talks, provided some optimism and in early trade Shanghai was up 0.8 percent while Hong Kong put on 0.6 percent and Sydney rose 0.5 percent.

However, Tokyo went into the break 0.8 percent lower.

Both sides have said they will resume talks in Beijing but with no date yet set dealers are looking ahead to a possible meeting between Trump and Xi at the G20 in Japan at the end of June.

"It's just too early to tell if this is a buy (on equity markets), on slightly oversold conditions, or if it's the start of stabilisation," Gina Martin Adams, chief equity strategist at Bloomberg Intelligence, told Bloomberg TV.

"Our working thesis is that we're going to be in for a period of volatility for most of the next month as we await the G20 meeting."

And OANDA senior market analyst Jeffrey Halley warned that "sentiment remains fragile and subject to the whims of trade headlines on either news tickers or social media accounts".

He added that while some gains could be expected "one suspects a lot of money will remain on the sidelines as we await more clarity on the trade situation".

Oil prices dipped in Asian trade on Wednesday following a surprising rise in US crude stockpiles but remain propped up by tensions in the Middle East.

Major producer Saudi Arabia said Tuesday a pumping facility on the Red Sea had been attacked by armed drones, an act claimed by Yemeni rebels.

That came days after sabotage attacks on four ships, including two Saudi Arabian oil tankers, in the United Arab Emirates.

"Trade issues will continue to cap gains in Asia, but if anything, the incidents on opposite sides of Saudi Arabia will bring home how vulnerable the flow of oil is from the Middle East," said Halley.