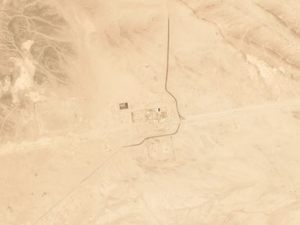 A satellite image obtained by The Associated Press shows one of the two pumping stations attacked by drones in Saudi Arabia apparently intact.

The image from San Francisco-based Planet Labs Inc. that the AP examined on Wednesday shows Saudi Aramco's Pumping Station No. 8 outside of the town of al-Duadmi. It's 330 kilometers, or 205 miles, west of the capital, Riyadh.

The photo, taken Tuesday after the attack claimed by Yemen's Houthi rebels, shows two black marks near where Saudi Arabia's East-West Pipeline passes by the facility. Those marks weren't there in images taken Monday.

The attack came as regional tensions flared, just days after what the kingdom called an attack on two of its oil tankers off the coast of the United Arab Emirates.