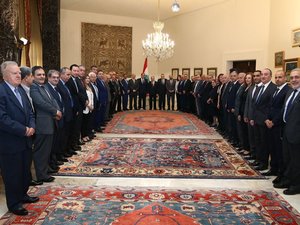 President Michel Aoun on Wednesday reassured that the salaries of the lower and middle classes will not be affected by the austerity measures pertaining to the 2019 state budget.

Meeting with a delegation from the Economic and Social Council led by Charbel Arbid, the president stressed the need to “turn the Lebanese economy from one based on services into a productive one.”

He also reassured that “the salaries of lower and middle classes will not be touched in the draft state budget.”

Aoun also discussed the 2019 budget with a delegation from the Association of the Armed Forces Veterans.

The retired servicemen underscored that it is unacceptable to slash three percent of their medical care compensations as the president underlined his keenness on their rights and on the rights of those in active service.

Lebanon is set to impose austerity measures to combat its bulging fiscal deficit. It is one of the world's most indebted countries, with public debt estimated at 141 percent of gross domestic product in 2018, according to credit ratings agency Moody's.

The budget for 2019 has yet to be finalized, but thousands of Lebanese public employees went on strike last week amid fears that their salaries and benefits would be cut as part of strict austerity measures to reduce a ballooning budget deficit and massive national debt. They included employees at Banque du Liban, Beirut's port, the Social National Security Fund and the main state-run landline telephone company.

Retired servicemen have also staged a series of protests across Lebanon.