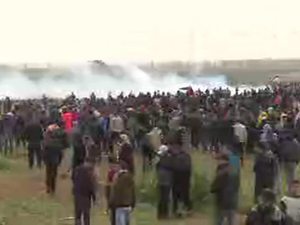 Palestinians protested Wednesday for the annual commemoration of what they call the Nakba, or catastrophe, when hundreds of thousands were expelled or fled during the 1948 war surrounding the creation of Israel.

Thousands gathered at various locations along the volatile border fence between Israel and the Gaza Strip, while crowds also demonstrated in the occupied West Bank.

Clashes erupted along parts of the border fence, with the health ministry in Hamas-run Gaza reporting 47 people wounded, but the protests were smaller and calmer than anticipated, an AFP journalist said.

The AFP journalist on the border saw a number of kites being floated across the border and a fire breaking out inside Israeli territory.

Palestinians in Gaza have regularly used kites with firebombs attached to them to set fires on the Israeli side of the fence.

Israel's military said around 10,000 "rioters and demonstrators" were along the Gaza fence.

"The rioters are setting tyres on fire and hurling rocks," it said in a statement.

"A number of explosive devices have been hurled within the Gaza Strip as well, and a number of attempts have been made to approach the security fence."

It said "troops are responding with riot dispersal means."

In the West Bank city of Ramallah, protesters held up giant paper keys to symbolise their will to return to the lands and homes they were expelled from or were forced to abandon, now located inside Israel.

Palestinians commemorate the Nakba every year.

More than 700,000 Palestinians fled or were expelled from their land during the 1948 war surrounding the creation of Israel.

Separately, there have also been regular protests and clashes along the Gaza border for more than a year.

At least 293 Palestinians have been killed by Israeli fire in Gaza since the protests began in March 2018.

The majority died during the often-violent weekly protests, though others were killed in Israeli airstrikes or by tank fire in response to violence from Gaza.

Six Israelis have been killed in Gaza-related violence over the same time period.

If I’m not mistaken Philippo, catastrophe translates to Shoah in Hebrew. Have some humility please and don’t mock them. Don’t justify the unjustifiable. The Nazis justified the genocide using the same logic as you do, and so did the communists and the tsars in their days. You need to be fair and own your mistakes/crimes . There was nothing wrong in wanting the create a nation for Jews, it’s totally different when it’s done at the expense of other people who themselves defend directly from Jews who didn’t chose to flee and later converted to Christianity and Islam.

You make me repeat:
on 29th November 1947, the Arabs would have accepted the UN Resolution on the establishment of an independent Palestinian state at the side of Israel, just imagine how it would look today.
You are mistaken - Catastrophe in Hebrew is Ason, Shoah in English is Holocaust. :

The original meaning of the word Shoah is calamity. Again, you’re using twisted logic. Had the Jews merged in with the European society there wouldn’t have been a genocide. You justify the use of brutality to achieve an objective... this isn’t very peaceful at all. Has israel achieved peace with this method ? The world put puppets in Israel’s neighboring countries to keep it safe, at the expense of millions of people being crushed by oppressive regimes. Do you believe this will serve Israel’s interests on the long term? Who does the oppressed blame? The West, Russia and the Israelis. Peace takes courage and the Israeli government isn’t courageous, it’s hiding behind its huge and disproportionate arsenal. The Vics are the palos... and I’m sure you know by now that I’m not particularly fond of them for personal reasons, but they are Israel’s victims before being Abbas’ (one of those puppets I mentioned). Don’t expect peace with puppets....