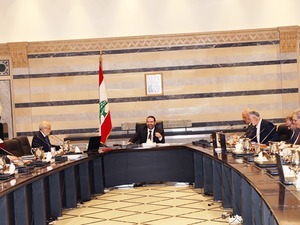 The Lebanese Forces on Wednesday slammed what it called procrastination as the government failed anew to finalize its discussion of the 2019 draft state budget.

“Today we finalized all the legal articles related to the state budget which were raised during the previous sessions and we will hold another session Friday at 1:30 pm, during which the finance minister will submit a final report on the numbers of ministries and subordinate administrations,” Information Minister Jamal al-Jarrah said after a cabinet session.

Asked whether the debate might drag into next week, Jarrah said: “We might not finish this week, because we cannot but take all proposals into consideration.

Foreign Minister Jebran Bassil meanwhile tweeted that he stressed to Cabinet his stance that “rejects hiking the budget of any ministry.”

Defense Minister Elias Bou Saab for his part lamented that some in Cabinet tried to negotiate with him to “give up the funds dedicated to sending flowers on behalf of the army chief to the families of martyrs.”

“Contrary to what the information minister said, Measure No. 3 was not approved and I agreed with PM Saad Hariri on holding a meeting with Interior Minister Raya al-Hassan to agree on a formula that suits both the army and the Internal Security Forces,” Bou Saab added.

“We slashed the defense ministry's budget without touching salaries,” the minister said, adding that “those who want to preserve the servicemen's rights must find other sources to lower the deficit.”

The minister also called Hariri to inquire about a media report claiming that the premier had called off a nightly cabinet session after he was “infuriated” by Bou Saab's remarks.

“I don't know where they got this report from,” Bou Saab quoted Hariri as telling him.

State Minister for Administrative Development May Chidiac of the LF meanwhile decried “the re-discussion of approved points,” warning that “this procrastination indicates that we will not finish this budget.”

Lebanon has vowed to slash public spending to unlock $11 billion worth of aid pledged by international donors during an April 2018 conference in Paris.

Last month, Hariri vowed to introduce "the most austere budget in Lebanon's history" to combat the country's bulging fiscal deficit, sparking fears among public sector employees that their salaries may be cut.

Lebanon is one of the world's most indebted countries, with public debt estimated at 141 percent of GDP in 2018, according to credit ratings agency Moody's.

Syria will not approve of this budget or any other budget that would allow Lebanon to move forward. Instead personal deals will be tied to it to make it more complex and to insure those who procrastinate stay in tune with Syrias goals.