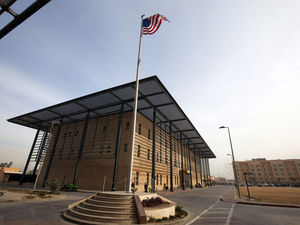 The officials, who spoke on condition of anonymity, said that the threat came from Iraqi militias commanded and controlled by Tehran's Islamic Revolutionary Guard Corps.

"This is an imminent threat to our personnel," said a second official.

Earlier Wednesday, the U.S. State Department ordered all non-emergency staff to leave its embassy in Baghdad and consulate in Arbil, citing a non-specific threat from "terrorist and insurgent groups" in Iraq that included "anti-U.S. sectarian militias."

The move came 10 days after the White House ordered a US aircraft carrier task force and B-52 bombers to the Gulf to prepare to respond to any Iranian-directed strike against US interests or allies in the region.

Washington though has been vague about the specifics of the intelligence it has that allegedly indicates Tehran's plans to hit US personnel.

"This threat stream, let me tell you, is real," said the second official.

"It's IRGC-commanded and controlled Iraqi militias," the official said.

"There is no doubt in my mind that under the circumstances, a partial ordered departure is a reasonable thing to do."

Both officials stressed that the United States was not seeking an armed confrontation with Iran, despite the Pentagon's military build-up in the Gulf.

"There is absolutely no desire or interest in a military conflict with anybody," the official said.