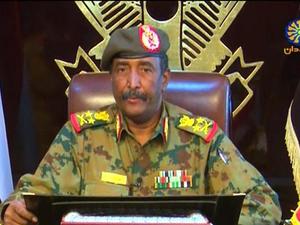 On Wednesday army generals and protest leaders were expected to decide on the make-up of a new body to govern Sudan for three years, the thorniest issue in instating civilian rule following the ouster of longtime autocrat Omar al-Bashir last month.

But after at least eight people were reported wounded by gunshots near a sit-in outside the army complex in the capital, Sudan's army ruler General Abdel Fattah al-Burhan announced negotiations would be suspended for 72 hours.

Burhan -- the chief of the ruling military council that took power after Bashir was toppled -- left the door open to resume talks but demanded protesters dismantle roadblocks in Khartoum, open bridges and railway lines connecting the capital and "stop provoking security forces".

There were "armed elements among demonstrators who were shooting at security forces", he added.

"They asked us to dismantle barricades in parts of the capital," Rashid al-Sayid, a spokesman of the umbrella protest movement the Alliance for Freedom and Change said.

Roadblocks on key thoroughfares are being used by demonstrators to pressure the generals to transfer power to a civilian administration.

The protest group that spearheaded the campaign against Bashir said the generals wanted the demonstrators to restrict themselves to the sit-in area where thousands have camped for weeks in central Khartoum, demanding civilian rule.

Some roadblocks were later removed after the protest group urged demonstrators to abide by the request, an AFP correspondent reported.

Protester Mohamed expressed disappointment over the suspended negotiations, telling AFP they had "delayed so many times and there have been so many assaults on us".

The protest movement is demanding a civilian-led transition, which the generals have steadfastly resisted since bowing to their demands and toppling longtime autocrat Bashir.

During the first two days of talks the two sides had agreed on an overall civilian structure, including a three-year transitional period for the full transfer of power to a civilian administration.

They had also agreed that parliament be composed of 300 members for the transition, with 67 percent from the alliance and the rest drawn from other political groups.

The composition of the new sovereign council has been the toughest part of the negotiations, with the two sides so far proposing different compositions of the body which is expected to take all key decisions concerning national issues.

The generals want it to be military-led, while the protesters insist on a majority civilian body.

Earlier General Yasser al-Atta, one of the members of the current ruling military council, had vowed to reach a deal by early Thursday that "meets the people's aspirations".

But in his statement announcing the suspension, chief Burhan said the protesters were "provoking the security forces", referring to reports of clashes between demonstrators and members of the paramilitary Rapid Support Forces (RSF).

The RSF had "taken the side of the people's revolution and played an important role in its victory".

Hours before the talks were due to start on Wednesday, the Alliance for Freedom and Change wrote on Facebook that eight people had been wounded by live fire.

A witness told AFP that gunshots had been fired near the sit-in.

The British ambassador to Khartoum said Sudanese security forces had fired at protesters.

"Extremely concerned by use of live ammunition by Sudanese security forces against protesters in Khartoum today, with reports of civilian casualties," Irfan Siddiq wrote on Twitter.

"Military council must act to stop this now. No more excuses."

Tension had flared since Monday when five protesters and an army officer were killed in shootings near the sit-in.

The new council is expected to form a transitional civilian government, which would then prepare for the first post-Bashir election after the three-year changeover period ends.

Protest leader Khalid Omar Yousef downplayed the role of the proposed ruling council, insisting Sudan would have a powerful cabinet.

"All powers will be in the cabinet's hand, which will be formed by the Alliance for Freedom and Change," he said.

Only the defence and interior ministries would be headed by military figures, he said.