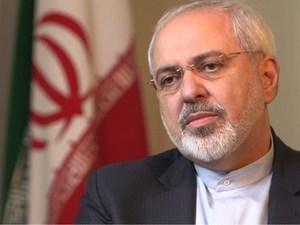 Iran accused the United States Thursday of an "unacceptable" escalation of tensions and said Tehran was showing "maximum restraint" despite Washington's withdrawal from a nuclear deal with world powers.

Tensions were already high after President Donald Trump walked away from the accord a year ago, but they have ratcheted up recently with the U.S. deploying an aircraft carrier group and B-52 bombers to the Gulf over alleged threats from Iran.

"The escalation by the United States is unacceptable," Iranian Foreign Minister Mohammad Javad Zarif said in Tokyo, where he is holding talks with Japanese officials.

"We exercise maximum restraint... in spite of the fact that the United States withdrew from JCPOA last May," Zarif said earlier, referring to the agreement on Tehran's nuclear program known as the Joint Comprehensive Plan of Action.

He added that Tehran remains "committed" to the deal, and said continuing assessments showed Iran was in compliance with the multilateral agreement.

Later, Zarif told reporters there was "no possibility" of negotiations with the United States to reduce spiralling tensions, describing U.S. pressure as an "act of suicide."

Zarif's comments came after the U.S. on Wednesday ordered non-emergency staff evacuated from its Baghdad embassy due to an "imminent" threat from Iranian-linked Iraqi militias.

The move added to growing fears that the long-time rivals could be on course for conflict despite both sides stressing they have no desire for war.

Trump, however, predicted Iran would "soon" want to negotiate and denied there was any discord in the White House over moves that critics say could lead to war in the Middle East.

"I'm sure that Iran will want to talk soon," the president tweeted. He also blasted media reports of White House turmoil, saying "there is no infighting whatsoever. Different opinions are expressed and I make a final and decisive decision."

Zarif dismissed that assertion late Thursday, telling reporters: "I don't know why President Trump is confident, but it's totally wrong."

Opponents of Trump say hardliners led by national security advisor John Bolton, who has long advocated toppling the Iranian regime, are pushing the country into war.

Despite international scepticism, the U.S. government has been pointing to increasing threats from Iran, a long-time enemy and also a rival of U.S. allies Israel and Saudi Arabia.

"This is an imminent threat to our personnel," said a second official.

"There is no doubt in my mind that under the circumstances, a partial ordered departure (from the embassy) is a reasonable thing to do."

Iran's supreme leader, Ayatollah Ali Khamenei, Tuesday insisted the showdown with the United States was a mere test of resolve.

"This face-off is not military because there is not going to be any war. Neither we nor them (the U.S.) seek war," he said.

US Secretary of State Mike Pompeo echoed that sentiment, saying in Sochi, Russia: "We fundamentally do not seek a war with Iran."

Despite the insistence that neither party wants conflict, world powers have rushed to urge calm and voiced concern over the escalating tensions.

Washington says it has received intelligence on possible attacks by Iranian or Iranian-backed forces, possibly targeting U.S. bases in Iraq or Syria.

After Ghika's comments drew a sharp retort from the U.S. Central Command, Britain's defence ministry said Wednesday they have "long been clear about our concerns over Iran's destabilizing behaviour in the region" -- while still not confirming any new imminent danger.

Some observers speculate Tehran is seeking to retaliate over Washington's decision in April to put Iran's Revolutionary Guards on a terror blacklist -- a move designed to stymie their activities across the Middle East.

But since the first U.S. warning on May 5, the only incident has been a still-mysterious "attack" Monday on tankers anchored off Fujairah, an Emirati port located at the strategically crucial entrance to the Gulf.

One or more vessels incurred light hull damage, but what caused the damage and who was behind it remains unknown.

Why? Go ahead and show the world your might! Are you afraid?

Its the same constraint the bearded goat has had with Israel. Each time they wack Kizb they claim the next time they will raise Israel to the ground lol.