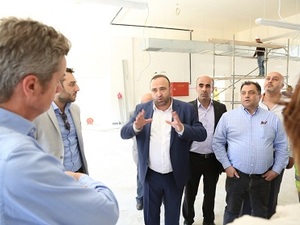 New Deputy Director for Middle East and North Africa Division for the Department for International Development (DFID) Jonathan Hargreaves ended a two-day visit to Lebanon (13-14 May) to see for himself the progress of UK assistance to Lebanon in the education, humanitarian and economic opportunities sectors. He visited three UK aid funded projects in the Bekaa Valley, a press release said.

In Zahle, he met with the Union of Municipalities in Qalaat Al Istiklal – Rachaya and farmers that are benefiting from the Lebanon Host Communities Support Programme (LHSP) delivered in partnership with the Ministry of Social Affairs and UNDP. With the construction of a facility for packaging local agricultural products, the project will provide jobs, security and access to regional/international markets to local farmers affected by the close down of regional markets since the Syria crisis. The residents of the surrounding villages rely mainly on the production of fruits and vegetables as a source of main income and livelihood. Since 2014, the UK support to LHSP has reached over £48 million so far.

Visiting an Informal Tented Settlement, Jonathan met with Syrian refugee families who had fled Syria’s now eight year-long conflict. UK support - in partnership with the UN’s World Food Programme - is supporting tens of thousands of the most severely vulnerable families with cash assistance. This monthly allowance enables households to meet their most urgent survival needs whether it be food, household supplies or vital medicine for children. Since summer 2017, over £91 million of UK humanitarian support has been dedicated to this life-saving programme.

Given education is a UK priority in Lebanon, with UK support from 2016-21 reaching up to £165 million, Jonathan visited a Community Based Early Childhood Education Centre, in Zahle, for children aged 3-6 years. The centre is run by World Vision International and funded through the ‘No Lost Generation Initiative-NLGI’ programme, which is delivered by UNICEF. DFID has committed £65 million of support to NLGI programme to deliver non-formal education to up to 100,000 vulnerable out of school children across Lebanon to support them into formal education as well as psychological support for 140,000 women and children effected by trauma.

At the end of his visit Jonathan Hargreaves said:

‘I’m delighted to be back in Lebanon to follow-up on UKaid funded programmes across the country. Lebanon continues to be one of the highest recipient of UKaid in the region. It was heart-warming to meet with beneficiaries from across the humanitarian, education and economic sectors and to see the positive impact UKaid projects continue to have on people’s lives’.