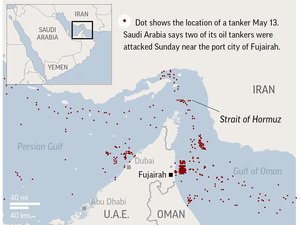 The Latest on developments in the Persian Gulf region and elsewhere in the Mideast amid heightened tensions between the U.S. and Iran (all times local):

The Qatar-funded satellite news broadcaster Al-Jazeera says that Doha is trying to "defuse escalating tensions" across the Persian Gulf.

Al-Jazeera said the U.S. was aware of the trip in advance, but did not elaborate further. FlightRadar24.com, a flight-tracking website, showed a Qatari government airplane landed in Tehran on Saturday.

Qatar hosts the forward headquarters of the U.S. military's Central Command at its vast Al-Udeid Air Base. Several of the B-52 bombers ordered by the White House to the region amid the latest escalation between Washington and Tehran are stationed there.

Qatar has grown closer to Iran diplomatically amid it begin boycotted by four Arab nations over a political dispute.

Iran's foreign minister says his country is committed to an international nuclear deal but that the escalating U.S. sanctions are "unacceptable."

The remarks come amid rising tensions in the Mideast, with allegations of sabotage targeting oil tankers near the Persian Gulf, a drone attack by Yemen's Iranian-allied rebels and the dispatch of U.S. warships and bombers to the region.

Foreign Minister Mohammad Zarif told Japanese officials on Thursday in Tokyo that his country's response to the U.S. actions is within the frameworks of the current nuclear deal and Iran's rights.

Iran recently threatened to resume higher enrichment in 60 days if no new nuclear deal is in place, beyond the level permitted by the current one between Tehran and world powers. The U.S. pulled out of the deal last year.

Qatar still trying to play both sides of the fence....