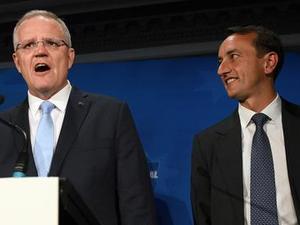 Australia's political leaders made last-gasp pitches to voters on Friday, on the eve of an election that polls show is going down to the wire.

"This will be the closest election we've seen in many, many years," Prime Minister Scott Morrison predicted while campaigning in north Queensland, home to a swathe of marginal seats that could decide the outcome.

Weeks ago the contest looked like it may be a rout for the centre-left Labor Party, which has long been leading Morrison's conservative Liberal-National minority government in opinion polls.

But a final survey by Ipsos Friday showed Morrison's coalition trailing Bill Shorten's Labor 49 to 51 percent, from 48 to 52 percent two weeks ago.

In some battleground seats, the race is even tighter, with the electorate split 50-50.

"I don't think anyone... thought this is where the election would be the day before," Morrison said.

The 51-year-old, however, faced a difficult last few hours of campaigning, with the death of legendary Labor Prime Minister Bob Hawke.

Morrison's claim to champion secure borders was also put to the test when it was revealed that two people from Rwanda accused of murder were allowed into Australia in return for the US taking innocent refugees detained by his government.

Morrison defended their transfer saying the allegations against the two men were "reviewed by our security agencies and... not found to be upheld".

Labor leader Shorten cut back on his campaign travels, choosing instead to stay in Sydney and talk about Hawkes legacy.

"Sadly, he didn't win the fight to be there on election night to see Labor form a government," the Labor leader told reporters.

"Personally, it's sad to me that I can't show him that we can win and form a government, because I feel I'd be fulfilling a contract that I mentally made with him all those years ago."

Elections in Australia, where voting is mandatory, are traditionally close, with former PM Malcolm Turnbull's Liberal-National coalition in 2016 scraping through with 76 seats, two more than the majority needed for the lower house.

The country has had a revolving door of prime ministers in recent years, with a series of leaders voted into power in one election deposed before the next poll three years later.