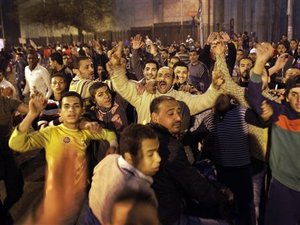 Syrians are organizing campaigns on Facebook and Twitter that call for a "day of rage" in Damascus this week, taking inspiration from Egypt and Tunisia in using social networking sites to rally their followers for sweeping political reforms.

Like Egypt and Tunisia, Syria suffers from corruption, poverty and unemployment. All three nations have seen subsidy cuts on staples like bread and oil. Syria's authoritarian president has resisted calls for political freedoms and jailed critics of his regime.

The main Syrian protest page on Facebook is urging people to protest in Damascus on Feb. 4 and 5 for "a day of rage." It says the goal is to "end the state of emergency in Syria and end corruption."

The number of people who have joined Facebook and Twitter pages calling for protests on Friday and Saturday is still relatively small, and some are believed to live outside the country.

President Bashar Assad said in an interview published Monday that his nation is immune from the kind of unrest roiling Tunisia and Egypt.

He was quoted in the Wall Street Journal as acknowledging that the events signaled a "new era" in the Middle East. But he said Syria, which has gradually shed its socialist past in favor of the free market in recent years, was insulated from the upheaval because he understood his people's needs and has united them in common cause against Israel.

Social networking sites were integral to rallying protesters in Tunisia and Egypt.

Facebook is banned in Syria, which makes organizing more difficult — even though many Syrians manage to access the social networking site anyway. More than 2,500 people have joined the page calling for protests on Feb. 4-5, with another 850 joining a page in favor of President Assad.

Assad, a 45-year-old British-trained eye doctor, inherited power from his father, Hafez, in 2000, after three decades of authoritarian rule.

He has since moved slowly to lift Soviet-style economic restrictions, letting in foreign banks, throwing the doors open to imports and empowering the private sector.

But Assad has not matched liberal economics with political reforms and critics of the regime are routinely locked up, drawing an outcry from international human rights groups.

He is seen by many Arabs, however, as one of the few leaders in the region willing to stand up to arch enemy Israel. And his support for Palestinian and Lebanese militant groups opposed to the Jewish state as well as his opposition to the U.S. invasion of Iraq has won him more support among his people than other Arab rulers.(AP)