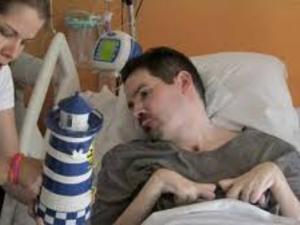 Doctors in France on Monday began removing the life support for a quadriplegic man who has been in a vegetative state for the last decade, in a hugely controversial case that has drawn in Pope Francis.

The dispute over the fate of Vincent Lambert, 42, who sustained severe brain damage after a traffic accident in 2008, has split his own family and become a subject of political tension in France ahead of European Parliament elections this weekend.

His parents, avowed Catholics, have repeatedly launched court action to keep him alive, putting them at odds with Lambert's wife and five siblings who believe the most humane course is to let him die.

A last-minute request Monday to the European Court of Human Rights in Strasbourg, eastern France, to halt the decision pending a review by the U.N. Committee on the Rights of Persons with Disabilities was rejected.

The court had already refused a similar request in April and said Monday there was "no new evidence" that would justify a new hearing.

Following a final judicial ruling to end the nutrition and hydration Lambert receives, doctors started halting his life support at the Sebastopol Hospital in the northern French city of Reims.

Medical sources told AFP that under these conditions it would mean that Lambert dies within days or a week.

The case has re-ignited a contentious debate over France's right-to-die laws, which allow so-called "passive" euthanasia for severely ill or injured patients with no chance of recovery.

Critics say the decision on Lambert is akin to killing a handicapped person, and Pope Francis weighed in on Monday in favour of keeping him alive.

"Let us always safeguard life, God's gift, from its beginning until its natural end. Let us not give in to a throwaway culture," the pontiff said.

French President Emmanuel Macron rejected calls by Lambert's parents and others to intervene, saying "the decision to stop treatment was taken after a constant dialogue between his doctors and his wife, who is his legal representative."

Lambert's wife Rachel said Monday that "to see him go, is to see him as a freed man."

"Everyone can have their own opinion and convictions... but above all can we now have our privacy," she told RTL radio.

Vincent Sanchez, the doctor treating Lambert who has been the target of the parents' anger, said in a message to the family that the "halting of treatments" and "profound and continued sedation" had been initiated.

In the message seen by AFP, he urged everyone to "rally around him (Vincent Lambert) so these moments are as peaceful, intimate and personal as possible."

The family has been torn asunder by the case.

"They are monsters! Monsters!" said his mother Viviane, 73, as she came to the hospital on Monday. The day earlier she had organised a demonstration outside with her husband Pierre, 90.

An emotional video of Viviane comforting her son in his room, telling him not to cry as he appears to blink away tears, was later posted on the website of the conservative Valeurs Actuelles magazine.

And one of Lambert's cousins, Helen Liaud, told journalists outside the hospital that she would start a hunger strike, calling the decision "unacceptable in a country like France."

"It means that we can... kill all handicapped people who can't feed themselves," she said.

But Lambert's wife, five of his siblings and his nephew Francois have all backed the decision to begin switching off the systems, agreeing this is the humane path given his condition.

In 2014 Lambert's doctors, backed by his wife and siblings, decided to stop his nutrition and hydration in line with the law.

But the parents, and his half-brother and sister obtained a court order to block the move on grounds his condition might improve with better treatment, setting off a complex and wrenching legal saga lasting half a decade.

But early this year, a French court sided with Sanchez's decision to stop the care keeping Lambert alive.

The ruling was upheld last month by France's State Council which decides on the validity of laws and legal decisions.

The U.N. committee on disabled rights this month asked France to suspend the decision while it conducts its own investigation, which could take years. The French government has made clear there is no legal obligation to abide by this.