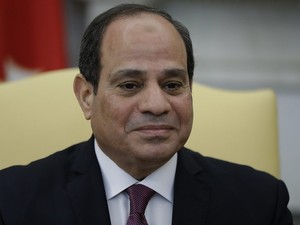 Egyptian authorities have ordered the release of a former diplomat who was detained after proposing a referendum on the regime of President Abdel Fattah al-Sisi, his lawyer said on Monday.

Masom Marzok, a former assistant foreign minister, was arrested in August 2018 after publicly criticising Sisi and calling for a poll on the former military chief remaining in power.

Marzok, a veteran of the 1973 Arab-Israeli war, was one of several activists detained on charges including partnering with a terrorist organisation and colluding to commit terrorist acts.

"The order to release ambassador Masom Marzok has been confirmed," defence lawyer Khaled Ali said on his Facebook page.

Several other activists who were detained around the same time, including economist Raied Salama and geology professor Yehia al-Qazzaz, are also set to be freed, Ali said.

"They may be released within hours," he added.

Former army chief Sisi took office in 2014 after leading the ouster of his predecessor Mohamed Morsi following mass protests against the Islamist leader, whose Muslim Brotherhood has since been outlawed.

Sisi was re-elected in March 2018 with 97 percent of the vote for a second term after standing virtually unopposed.

Under his rule, authorities have jailed thousands of Morsi's Islamist supporters as well as liberal and secular activists, including a popular blogger, actors, singers and journalists.