Miqati Eager to Have Best of Ties with Hariri: Cabinet Will be Formed Sooner or Later 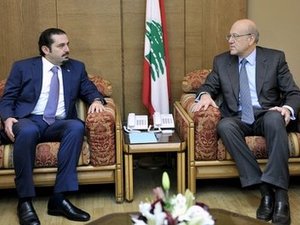 Prime Minister-designate Najib Miqati denied that he was trying to win allies from among the March 14 forces, saying he was only seeking with all possible means to form a national unity cabinet.

Miqati told An Nahar daily in remarks published Wednesday that his meetings with Phalange and Lebanese Forces leaders Amin Gemayel and Samir Geagea in addition to talks with Caretaker Minister Butros Harb were only aimed at “forming a cabinet that includes everybody.”

In a direct message to former Premier Saad Hariri, Miqati said: “I am eager to have the best of relations with Saad Hariri and I won’t be a reason or a cover for any national or sectarian dissent.”

“There is no personal disagreement between us and in politics we agree on national” interests, the PM-designate added.

He asserted that President Michel Suleiman didn’t suggest giving a portfolio to one of his relatives. Miqati described his ties with Suleiman as “comfortable” and said his task to form the government is “difficult but not impossible.”

“The government will be formed sooner or later,” the premier-designate told An Nahar.

Miqati’s circles told the newspaper that contacts are ongoing with several March 14 officials in an attempt “to find common grounds” to controversial issues.

Miqati is keen on forming a government that neither “shocks” nor “jolts” the Lebanese, they said.

The circles said fears by western countries over his nomination as a Hizbullah-backed candidate began dissipating.

The same circles told As Safir daily that Miqati would continue his consultations with March 14 officials despite Geagea’s statement on Tuesday that he feared the return of the era of Syrian hegemony during Miqati’s rule.

The sources stressed, however, that Miqati won’t wait for the March 14 decision on cabinet participation for long.