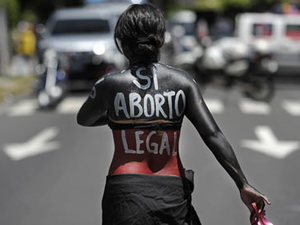 Nevada and Vermont are poised to enact laws that protect access to abortion, at a time when conservative US states have adopted highly restrictive measures.

These contradictory developments could accentuate existing disparities in access to the procedure for women in different parts of the United States.

Nevada's state assembly -- unique in the United States in that women hold the majority -- passed a measure Tuesday that decriminalizes the sale without prescription of drugs that induce miscarriages. Currently, self-induced abortions are punishable by up to 10 years in prison.

It also would no longer require doctors to explain to patients the physical and emotional implications" of having an abortion. Nor would they be required to determine their age or martial status.

The bill still must go to the state's senate, which had previously passed a similar version, for final approval before being signed into law by Governor Steve Sisolak, a Democrat.

Lawmakers in Vermont, meanwhile, have passed a law prohibiting "public entities" from interfering with or restricting an individual's right to terminate their pregnancy, recognizing access to abortion as a "fundamental right."

Vermont Governor Phil Scott, a Republican, said Tuesday he would not use his veto power to kill the bill.

These laws run counter to a wave of other laws passed by more than a dozen states that ban or sharply curtail the right to abortion.

"All across the country women's rights are being threatened by extremist politicians," Nevada state Democratic lawmaker Shea Backus said during debate there.

"These are Draconian laws that have no business in a free society," she added, according to comments cited by the Reno Gazette-Journal.

The southern state of Alabama has passed the country's toughest ban, prohibiting abortion in all cases -- even in cases of rape or incest -- making an exception only if the mother's life is at risk.

Earlier this month, the governor of Georgia signed into law a ban on abortion from the moment a fetal heartbeat is detected. Georgia became the sixth US state to outlaw abortion after roughly six weeks of gestation.

Missouri's legislature voted Friday to make the procedure illegal after eight weeks of pregnancy, with no exceptions for rape or incest.

Ohio, Mississippi, Kentucky, Iowa and North Dakota have enacted restrictive laws, while Florida and Texas are considering doing the same.

All of the state bans have either been blocked by a judge or are headed for the courts.

They are in opposition to the landmark 1973 US Supreme Court ruling that legalized abortion.

But their backers are seeking to appeal court rulings all the way to the Supreme Court in hopes its newly reinforced conservative majority will overturn Roe v Wade.