France's 'Yellow Vests': Noisy, But Not an Electoral Force 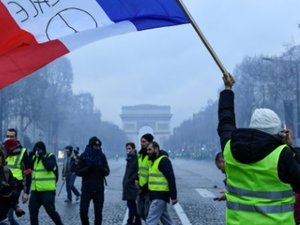 Christophe Chalencon, a blacksmith with right-wing views, is on the campaign trail around France seeking to turn his fame as a "yellow vest" protester into a seat in the European parliament. And it's no easy task.

"The yellow vests don't want anyone to represent them," he told AFP in between campaign stops for his "Citizen's Evolution" formation, which is competing in the European election in France this Sunday.

The difficulty for him is that the anti-government "yellow vest" movement, which has roiled national politics since mid-November, brings together people of all political stripes, many of whom have a strong anti-authority streak.

Despite his hopes, and the still high levels of public support for the protests, voter surveys show his party winning less than 1 percent.

"The polls are wrong," he shot back in his thick southern accent.

Their impact on French public life has been huge. Macron has been forced into a series of policy U-turns, while the protests and rioting have left a human toll of injuries and bankrupt businesses.

But from its height of nearly 300,000 people who spontaneously blocked roads and occupied roundabouts on November 17, the movement has dwindled to only 15,500 people last weekend, according to French authorities.

And their electoral prospects look dim.

At the beginning of the year, some polls showed a united "yellow vest" party could scoop up as much as 13 percent of votes amid widespread public sympathy for their cause of lowering taxes and helping the struggling working poor.

But many of the original leaders are no longer on speaking terms, while others have withdrawn from the public eye citing abuse and even death threats.

At one point, there was a danger of at least five yellow vest formations competing for seats in the European parliament.

This has been whittled down to Chalencon's "Citizen's Evolution" and the "Yellow Alliance" led by the singer and poet Francis Lalanne.

"Lalanne is going to get killed, he's going to get ripped to shreds," Chalencon said of his rival, who is forecast to win around 1.0-1.5 percent of the vote.

Other yellow vests have joined up with the hard-right candidate Nicolas Dupont-Aignan or the far-right splinter formation of Florian Philippot, creating confusion for voters wanting to back the cause.

Marc Pochon, an activist from Montargis south of Paris, said he had been campaigning for Lalanne, but in the end would vote for Macron's main political opponent, the far-right National Rally of Marine Le Pen.

"I'd rather vote against Macron," he told AFP, forecasting that the yellow vest vote would be "dispersed."

"On the roundabouts, there were people who supported the (hard-left) France Unbowed, people from the National Rally, people who voted for Emmanuel Macron and were disappointed," she told AFP in an interview last week.

"What brought everyone together was their opposition to Emmanuel Macron," she said.

Part of the problem for Chalencon too is that many of the yellow vests are people who have long switched off from politics and have given up voting.

Abstention rates on Sunday could be as high as 60 percent in France.

He complains, with some justification, that less-known candidates like him have been frozen out of the media, with attention focused on the duel between Le Pen and Macron.

But he says hatred of the 41-year-old president remains a mobilising factor and burns just as brightly despite Macron's announcements of tax cuts for the middle classes and a rise in the minimum wage.

"When you're in rural areas, people can't stand him," he said. "We're sick of him, we can't even look at him."

Macron sees himself as having responded to their grievances -- and he took a dig at the movement, and its would-be representatives, last week.

"It's a lot more difficult to propose something positive rather than opposing everything," he told reporters during a trip to southern Biarritz. "We don't make progress by opposing."