France Increases Pressure on Iraq Not to Execute IS Convicts 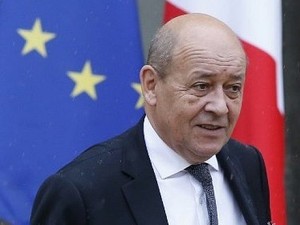 France said Tuesday it was stepping up efforts to stop Iraq executing four French citizens convicted of fighting alongside the Islamic State (IS) group.

An Iraqi court on Sunday sentenced three French nationals to death for joining the Islamic State group, the first IS members from France to be sentenced to capital punishment.

On Monday, a fourth French citizen was also condemned to death in Baghdad.

The four have 30 days to appeal.

"We are increasing the steps to avoid the death penalty for these four French citizens," Foreign Minister Jean-Yves Le Drian said on France Inter radio on Tuesday.

"We are opposed to the death penalty... I myself reminded the president of Iraq, President (Barham) Saleh, of our position," he said, without giving further details.

In recent months, Iraq has taken custody of thousands of jihadists, including foreigners, captured in neighbouring Syria by the US-backed Syrian Democratic Forces (SDF) during the battle to destroy the IS "caliphate".

France has long insisted that its adult citizens captured in Iraq or Syria must face trial locally, refusing to repatriate them despite the risk they face capital punishment for waging their jihadist war in the region.

Le Drian reaffirmed France's refusal to accept any repatriations of its nationals affiliated with IS.

"These terrorists -- because they are terrorists -- who attacked us, who also caused death in Iraq, must be judged where they committed their crimes," he said.

The Iraqi judiciary said earlier in May that it has tried and sentenced more than 500 suspected foreign members of IS since the start of 2018.

Its courts have condemned many to life in prison and others to death, although no foreign IS members have yet been executed.

The country remains in the top five "executioner" nations in the world, an Amnesty International report said in April.