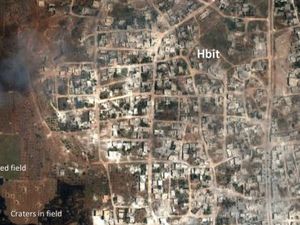 New satellite photos show significant damage to Syrian villages and surrounding farmland as a result of a government offensive on the last rebel stronghold in the country.

The images, provided to The Associated Press by the Colorado-based Maxar Satellites on Tuesday, show fires in olive groves and orchards during harvest season around Kfar Nabudah and Habeet, two villages on the edge of Idlib province where fighting has focused. The fires were apparently sparked by intense bombing in the area.

Kfar Nabudah fell to government control on Sunday. Activists, experts and Maxar say the crop burning is part of a "scorched earth" campaign that adds to the hardship of 3 million people in the rebel stronghold.

The U.N. said fires, triggered by bombings, destroyed staple crops such as wheat and barley.