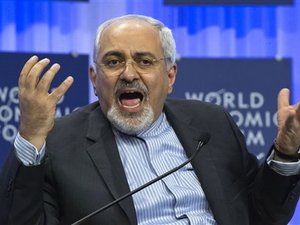 Iran hit out at the United States on Monday for "causing tensions" after President Donald Trump said his government was not seeking regime change and that he would welcome talks with Tehran.

The Trump administration was "hurting the Iranian people and causing tension in the region," Iranian Foreign Minister Mohammad Javad Zarif wrote on his Twitter account.

"Actions -- not words -- will show whether or not that's @realDonaldTrump's intent," Zarif added, referencing the US president's Twitter handle.

Khamenei is said to have issued a fatwa against nuclear weapons in 2003 and has reiterated it several times since.

Iran is locked in a tense standoff with the United States which has beefed up its military presence in the Middle East in response to alleged threats from the Islamic republic.

On Saturday, Zarif called a deployment of extra US troops to the region "very dangerous and a threat to international peace and security."

It follows a U.S. decision earlier this month to send an aircraft carrier strike force and B-52 bombers in a show of force against what Washington's leaders said they believed was an imminent Iranian plan to attack U.S. assets.

Washington says the latest reinforcements are in response to a "campaign" of recent attacks including a rocket launched into the Green Zone in Baghdad, explosive devices that damaged four tankers near the entrance to the Gulf, and drone strikes by Yemeni rebels on a key Saudi oil pipeline.

Iran has denied any involvement in the attacks.