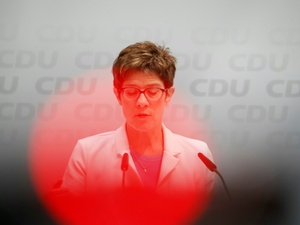 The CDU chief's comment came after her party and its centre-left coalition partner SPD suffered their worst scores in Sunday's European election -- a result partly blamed on the fact that some 70 YouTube stars had urged Germans not to vote for either party.

Addressing the issue on Monday night, Kramp-Karrenbauer said if 70 newspaper editors had called to boycott parties ahead of an election, that would be classed "clearly as propaganda".

"The question is... what are rules from the analogue realm and which rules should apply to the digital realm?

"I'll tackle this discussion quite aggressively," said Kramp-Karrenbauer, or AKK as she is dubbed in Germany.

Her comments immediately sparked a storm on social media with #AKKRuecktritt (AKKresign), #annegate, #Zensur (censorship) and #Meinungsfreiheit (freedom of opinion) making up the top four topics trending on Twitter in Germany.

Many users pointed to article five in the German constitution guaranteeing freedom of opinion, speech and writing.

The German Federation of Journalists also hit out against AKK's call, calling it "not just nonsense but also a violation of the constitution".

SPD general secretary Lars Klingbeil also warned that any attempt to limit freedom of expression "will definitely not be possible with my party".

"This is absurd. Nobody would get upset if an actor or an athlete made an election recommendation", said Klingbeil.

Kramp-Karrenbauer later tried to downplay her comments, saying it was "ridiculous to insinuate that I want to regulate expressions of opinion".

"Freedom of opinion is a precious value in a democracy.

"But what we have to talk about are rules that apply during elections," she wrote on Twitter.

AKK, 56, replaced Merkel as head of the CDU last December and is expected to seek the top job when Merkel's term ends in 2021.

The 70 Youtubers' call to vote against CDU, SPD and far-right AfD was a follow-up to an hour-long video rant from another online star Rezo, who blamed the centre-right-led coalition for failing to tackle poverty and climate change.

Put online on May 18, the clip had been viewed 12.6 million times by Tuesday, tumbling Merkel's party into crisis-fighting mode.