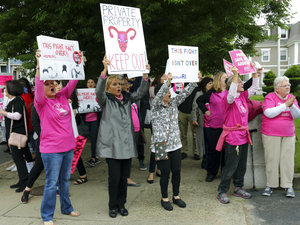 The U.S. Supreme Court weighed in on the explosive issue of abortion on Tuesday, upholding part of an Indiana law that requires the remains of aborted fetuses to be cremated or buried but sidestepping a separate case on the legality of the procedure.

The decision by the high court not to take up the wider case means the hot-button issue will remain off its agenda for now, even as activists push for a showdown over the nationwide right to an abortion.

The two Indiana cases were being closely watched as an indicator of how the top court -- which now has a conservative majority -- may eventually decide the divisive issue.

They both revolve around different parts of a law signed by then-Indiana governor Mike Pence -- now the vice president.

In the first case, the Supreme Court upheld the portion requiring that fetal remains be disposed of in the same manner as human remains and not as medical waste.

In a 7-2 decision, the court said the clause does not impose "an undue burden on a woman's right to obtain an abortion."

The other section of the law would prevent a woman from having an abortion based on the gender, race or disability of the fetus.

An appeals court struck down the law, and the Supreme Court said it would wait until other courts rule on the question before weighing in.

"We follow our ordinary practice of denying petitions insofar as they raise legal issues that have not been considered by additional Courts of Appeals," it said.

Republican-led legislatures in several U.S. states have passed bills restricting abortion access in a bid to eventually challenge the 1973 U.S. Supreme Court ruling in Roe vs Wade, which made abortion legal nationwide.

The southern state of Alabama passed a bill this month that amounts to a near-total ban on ending a pregnancy, even in cases of rape and incest.

Performing an abortion would be a crime that could land doctors in prison for 10 to 99 years.

Abortions would only be legal if the life of the mother is in danger or the fetus has a fatal condition.

Conservative-leaning Chief Justice John Roberts is seen as the potential swing vote if the constitutionality of abortion eventually comes before the court.