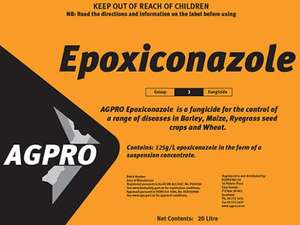 The French food safety agency ANSES on Tuesday barred the sale of epoxiconazole, a widely-used pesticide, citing a "worrying danger" to humans.

The fungicide, mainly produced by the German chemical giant BASF, is used for about half of France's cereal crops and 70 percent of beetroot cultivation, ANSES said.

The agency says the substance, already a suspected carcinogen, is thought to be "toxic" to human reproduction.

"A guide published in June 2018 at the European level set scientific criteria to say whether an active substance is an endocrine disruptor," ANSES managing director Caroline Semaille told AFP.

"On the basis of the new guide, we can establish and confirm that (epoxiconazole) is an endocrine disruptor."

The pesticide, of which 200 tonnes is sold in France each year under dozens of brand names, presents "a worrying danger for man and the environment", the agency said in a statement.

According to the World Health Organization, an endocrine disruptor is a substance, or mixture of substances, which disrupts hormonal system functions and consequently is harmful to human health and reproduction, including at very weak levels of exposure.

The suspect compounds have been linked to altered reproductive function in males and females, increased incidence of breast cancer, disturbance of the nervous and immune systems, abnormal growth, and stunted development in children.

The EU rules finally adopted in 2017 did not satisfy activists and cover only chemical agricultural inputs and biocides.

ANSES singled out epoxiconazole because of its widespread use but will subject other substances to the EU guidelines, Semaille said.

The agency will relay its decision to Brussels, which is to decide whether to renew authorisation for use of the pesticide by April 2020.

The products must be removed from sale in France within 12 months, Semaille said.

She noted that "alternatives in the same family (of substances) such as triazoles" exist, and that "new substances are being evaluated at the European level."

The debate over the use of pesticides is highly sensitive, needing to balance concern for human health over the needs of the agricultural sector.

Controversy over the herbicide glyphosate has taken the spotlight in recent years, but the government has set a wider goal of reducing the use of chemical agricultural inputs by 25 percent by 2020 and halving them by 2025.