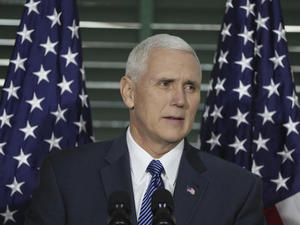 U.S. Vice President Mike Pence on Tuesday urged the Supreme Court to take up a case about abortions based on sex, race or potential disability of the fetus, after the high court sidestepped the issue.

While serving as governor of Indiana, Pence had signed into law a ban on so-called "selective" abortions. A lower court struck it down, and earlier Tuesday, the U.S. Supreme Court opted not to weigh in until lower courts do so.

Pence's office released a statement saying it remained "hopeful that at a later date the Supreme Court will review one of numerous state laws across the U.S. that bar abortion based on sex, race, or disability."

"Countries across the globe prohibit selective abortion -- and the United States should do the same," said the statement from Pence's press secretary Alyssa Farah.