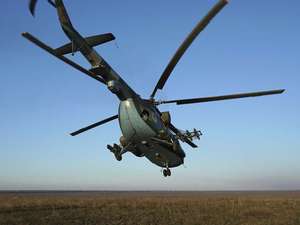 An army helicopter has crashed in western Ukraine killing four servicemen, the military said on Thursday.

The Mi-8 helicopter crashed in the western Rivne region during a training flight late Wednesday, killing three crew members and the commander of the 16th Separate Army Aviation Brigade of Ground Forces, a statement said.

It was not immediately clear what caused the crash.

"Our army should not be losing people during games and drills," the 41-year-old president was quoted as saying by his office.

Zelensky, a former comedian, swept last month's presidential election in a rebuke to the establishment fuelled by popular anger over war with Russian-backed separatists and social injustice.

The conflict against Russia-backed insurgents in the east has claimed some 13,000 lives since 2014.