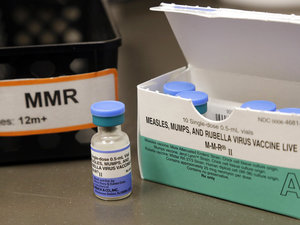 Mexican health officials have confirmed a case of measles in a British woman who arrived in the country's touristic Caribbean coast a week ago, authorities said on Saturday.

The 50-year-old woman arrived Monday at the airport in Cancun with a final destination of Playa del Carmen, the area's second most frequented resort.

"Upon presenting signs and symptoms of illness she sought medical attention at a private hospital, where they were recognized as a probable case of measles," the Health Ministry said in a statement.

Relatives of the patient -- a 33-year-old man, a 29-year-old woman, a 14-year-old boy and a seven year old girl -- were currently showing no symptoms, it said.

The woman was transferred Tuesday to a hospital run by the Health Ministry, which activated epidemiological protocols, taking samples for analysis and identifying the woman's contacts.

Health authorities in the state of Quintana Roo and the federal government are taking steps "to avoid contagions and to detect secondary cases," particularly among children and adolescents, the ministry said.

Measles is a main cause of death among children, according to the World Health Organization. Mexico's last measles epidemic was between 1989-90, with 89,163 cases reported.

The last indigenous case was recorded in 1995, although 185 imported or related cases have been identified between 2000 and 2019, the ministry said.

The current case has come amid a global resurgence of the disease, due largely to an anti-vaccination movement that has emerged in recent years.

According to the WHO, cases of measles throughout the world quadrupled in the first three months of this year, compared to the same period last year.