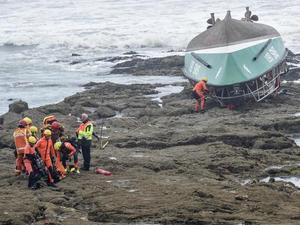 France was clearing up Saturday after a massive storm ripped across the country, leaving three dead and thousands of homes without electricity.

"In late morning, a boat from the SNSM capsized 800 metres from the coast around Les Sables d'Olonne with seven people on board," the local prosecutor's office said in a statement.

Three of them died while four managed to swim to shore, the statement added.

The team from the National Society of Sea Rescue (SNSM) had been attempting to help a fishing boat which was struggling in the giant swell caused by storm Miguel, which packed winds of up to 120 kilometres an hour (75 mph).

Maritime officials said the crew was using one of the SNSM's "all weather" vessels, specially designed to be unsinkable and to automatically right itself if capsized.

National electricity company Enedis said meanwhile that  28,000 homes were without power Saturday, with Normandy and northern parts of Acquitaine the worst affected.

"More than 1,000 personnel have been mobilised in the affected regions," it said in a statement.

In Paris meanwhile, a man was seriously injured after a falling tree knocked down a street light which hit him.

Rescue officials said the manwas fighting for his life  after the incident in the 19th district in the northeastern part of the city that was hit by high winds.