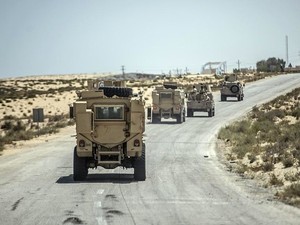 It said the suspects were killed in a shootout as security forces raided a building used as a hideout in the town of El-Arish, and three assault rifles and a explosive vest were seized.

Since Wednesday's attack claimed by the Islamic State group on a checkpoint, southwest of El-Arish, the capital of North Sinai, in which eight policemen died, operations by security forces have killed a total of 26 "terrorists", according to the ministry.

The hotspot of North Sinai in eastern Egypt has long been a centre of insurgents affiliated with IS.

In February 2018, the army launched a nationwide offensive against the militants.

According to official figures, around 650 militants have been killed since the start of the operation, while the army has lost some 50 soldiers.

No independent statistics are available and the region is largely cut off to journalists, making verification of casualty figures extremely difficult.